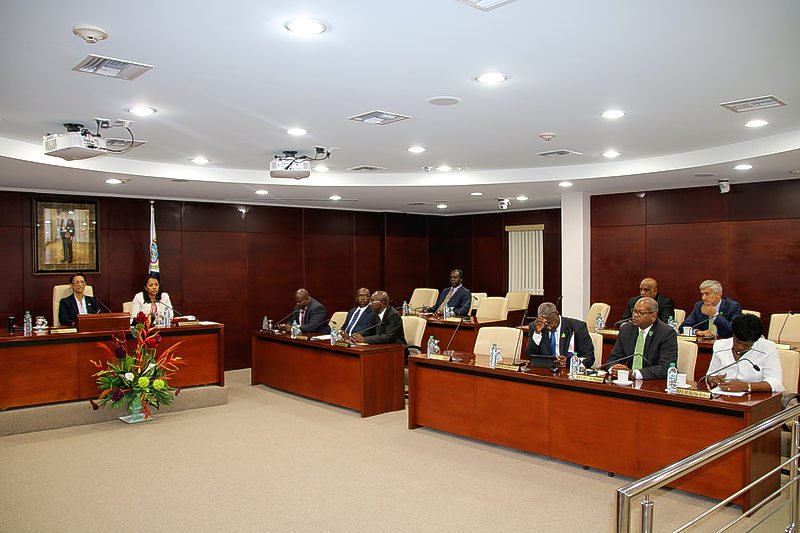 PHILIPSBURG–The sixth Parliamentary Year came to a close on Monday with faction leaders giving their take on the highs and lows of the legislature. Much focus was put on the fact that the country will go to the polls in just over two weeks to elect a new Parliament, two years earlier than expected due to snap elections.

Independent Member of Parliament Cornelius de Weever in his closing address said that “for the love of St. Maarten” MPs and political parties “should put politics aside and work together in the interest of St. Maarten. Do not play politics with our health.”
De Weever said numerous laws he worked on as a Minister came to the floor of Parliament as he served as an MP and passed. He said the Constitution and the Rules of Order of Parliament were “trampled” by the current National Alliance (NA)-led coalition when it took office at the end of last year.
United People’s (UP) party deputy leader MP Franklin “Frankie” Meyers said the country is feeling the effects of the constant change of Governments and this has led to the people becoming very despondent in the political and governance process.
The country is faced with issues such as the budget running a deficit and the garbage collection being at its worst in years. “These are not political party problems. They are St. Maarten problems that need to be fixed,” said Meyers.
The people need “to have hope and they need to hear from us that there is hope,” said National Alliance (NA) fraction leader MP George Pantophlet. The situation in the country “calls for us to work together,” he said.
The NA has “achieved some things that have been in the pipeline for some time,” said Pantophlet, naming the restart of work to complete the Government Building on Pond Island and getting the new hospital project moving. He also maintained, despite concerns raised by the Committee for Financial Supervision CFT and claims by the opposition, that the 2016 budget is balanced saying that “a budget is just an estimate.”
The just closed Parliamentary Year was described as “productive” and as forming “a solid foundation” for the coming years by independent MP Leona Marlin-Romeo. She said contrary to common belief much has been accomplished in the past year. She said her focus has been on “saving money” and “safeguarding the health of the people, especially children.” This focus will continue should she be re-elected to Parliament.
Looking ahead, Marlin-Romeo said the people “deserve professional and proactive representation,” qualities she possesses.
Democratic Party (DP) leader Parliament Chairwoman Sarah Wescot-Williams called on her fellow MPs to consider signing on to her proposed political code of conduct to stave off ship-jumping following the September 26 Parliamentary Elections. She said “in the absence of the reason for the existence of this [NA-led – Ed.] Government” which is electoral reform the code of conduct should be considered by political parties.
MP De Weever asked for a point of order during Wescot-Williams’ presentation asking her to hand over the meeting to deputy Parliament Chairman Pantophlet as she should not be making a speech as DP fraction leader while serving as chairwoman. Her response was that it was not an ordinary meeting of Parliament and he should know better than to interrupt a discourse by an MP.
Following the meeting, Wescot-Williams issued a press statement saying: “It is ironic that MP De Weever, who had just finished his own parliamentary year-end presentation with a call for unity, could not allow the Chairlady of Parliament [DP fraction –Ed.] to make her year-end presentation uninterrupted … It should, however, surprise no-one. This has been the ‘style’ of this MP from day one, disrespectful and rude, especially towards the female chairperson of Parliament.”
Three fraction leaders – MPs Frans Richardson (United St. Maarten Party), Maurice Lake (independent) and Silvio Matser (independent) – were not present for the closing meeting.
The closure of the Parliamentary Year has nothing to do with the upcoming elections. The working year of Parliament is established by the Constitution as starting on the second Tuesday of September thus the closing is the second Monday of the month.
The current Parliament will come to an end when the dissolution decree comes into effect on October 31 and the new Parliament Members take their place in what some are referring to as the “Halloween Parliament.”