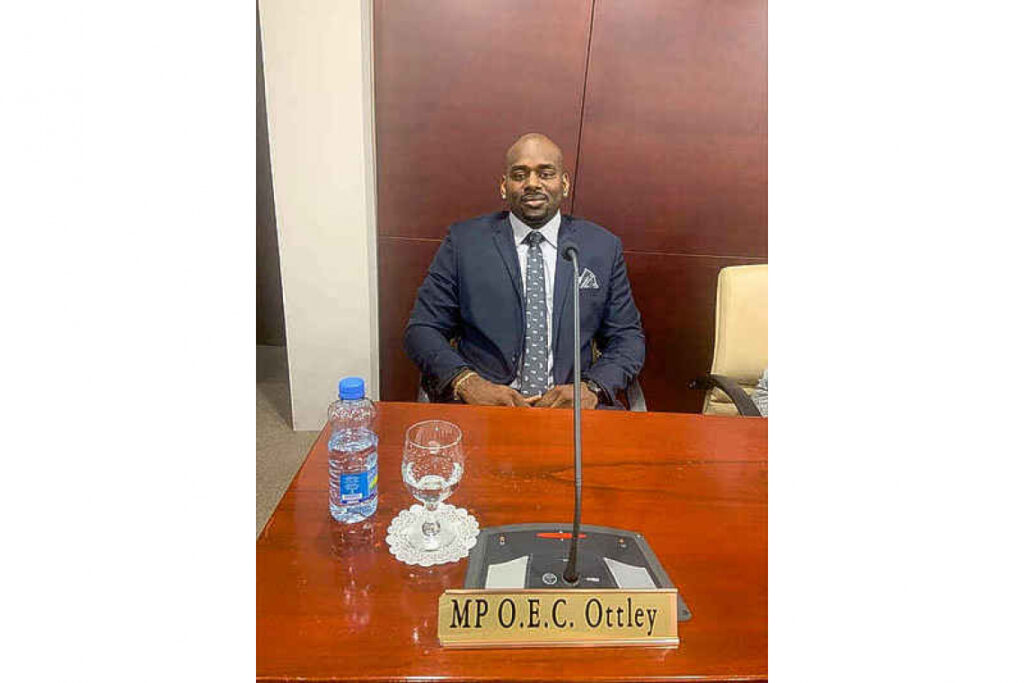 Author of the motion UP MP Omar Ottley.

PHILIPSBURG–Members of Parliament (MPs) on Monday unanimously passed a motion to, amongst other things, request that the Kingdom government revisit its World Bank agreements so that reconstruction funds for the country can be reallocated for St. Maarten’s economic growth. The motion also seeks to have local construction companies be given preference for projects.

The motion, which was submitted by United People’s (UP) party MP Omar Ottley, was passed by 13 votes for and zero against, at the end of a meeting which spanned several weeks, with several agenda points including the reconstruction funds for St. Maarten.

In the motion, MPs called for the legislature to send a request to the Kingdom of the Netherlands, making use of Article 67 of the Constitution, to revisit the World Bank agreements and to make use of the provision to invoke Article 4 and 5.2 of Annex 2 of the administrative agreement between the government of the Netherlands and the World Bank. This article, the motion says, will enable the Dutch government to reallocate “much-needed funds for our economic growth.”

According to the motion, the policy must include detailed “contract award criteria with simplified local procurement preferences reflected as one of many criteria in a ‘best value’ evaluation and award process with higher scoring on the social benefits of contracting locally when conducting a cost-benefit analysis and best price-quality ratio to determine a winning bidder.”

Standard terms and conditions must be stipulated in the solicitation for requests for proposals (RFPs), requests for qualifications (RFQs) and requests for information (RFIs) regarding provisions for joint ventures among foreign and local contractors, whereby foreign contractors make use of local subcontractors when supply is available locally. Government should also “clearly establish what is considered a local business,” the motion read.

According to the motion, no machinery or heavy equipment should be imported by foreign contractors, once available locally.

In motivating his vote, author of the motion Ottley said the country has a serious problem in that it is three years since Hurricane Irma and St. Maarten is yet to see any major progress in its economy using funds from the Trust Fund.

The entire Parliament and government together can send a “great message” and he believes this is the best way to “apply pressure” to let authorities in the Netherlands know that St. Maarten is not in agreement with the way things have been going. Government and Parliament can request change to support local businesses and ensure that much of the funds remain in the country.

National Alliance (NA) MP George Pantophlet said he is happy that the motion calls for a local to be defined, as this would be interesting.

United Democrats (UD) MP Sarah Wescot-Williams said that, with government’s input, MPs could have drafted a watertight motion, but in the absence of this, MPs have to “go by government distilling from the motion the spirit of the motion and acting accordingly.”

She said she believes strongly that local business sectors need some form of protection and as such she would support the motion, and she strongly urged the government to act on it and not shelve it because some parts are not executable without accompanying laws.

She doubted whether the part of the motion calling for the Kingdom government to revisit its World Bank agreements stood a chance, but noted that St. Maarten should create its own investment vehicle, potentially collaborating with others in the region.

United St. Maarten Party (US Party) MP Claudius “Toontje” Buncamper said that while some points in the motion still needed to be tweaked, he believed that now is the time to show that the local economy must be protected by putting parameters in place.

Calling Ottley’s efforts in presenting the motion refreshing, UP MP Rolando Brison said Ottley, via the motion, had embarked on a campaign of doing something to promote local entrepreneurship and to protect locals’ ability to sustain themselves. He said this is an example of Ottley doing what he said he would do with his mantra “only we can save we.” Brison said that while it is a motion of Parliament, it is up to the government to execute it.

Prime Minister Silveria Jacobs said the passing of the motion across party lines showed the type of unity that seemed to have become the norm in St. Maarten. She said government would do its utmost to execute the motion as intended, and if any glitches exist, government will return to Parliament to discuss them and ensure that it gets the sentiment of Parliament before moving forward.