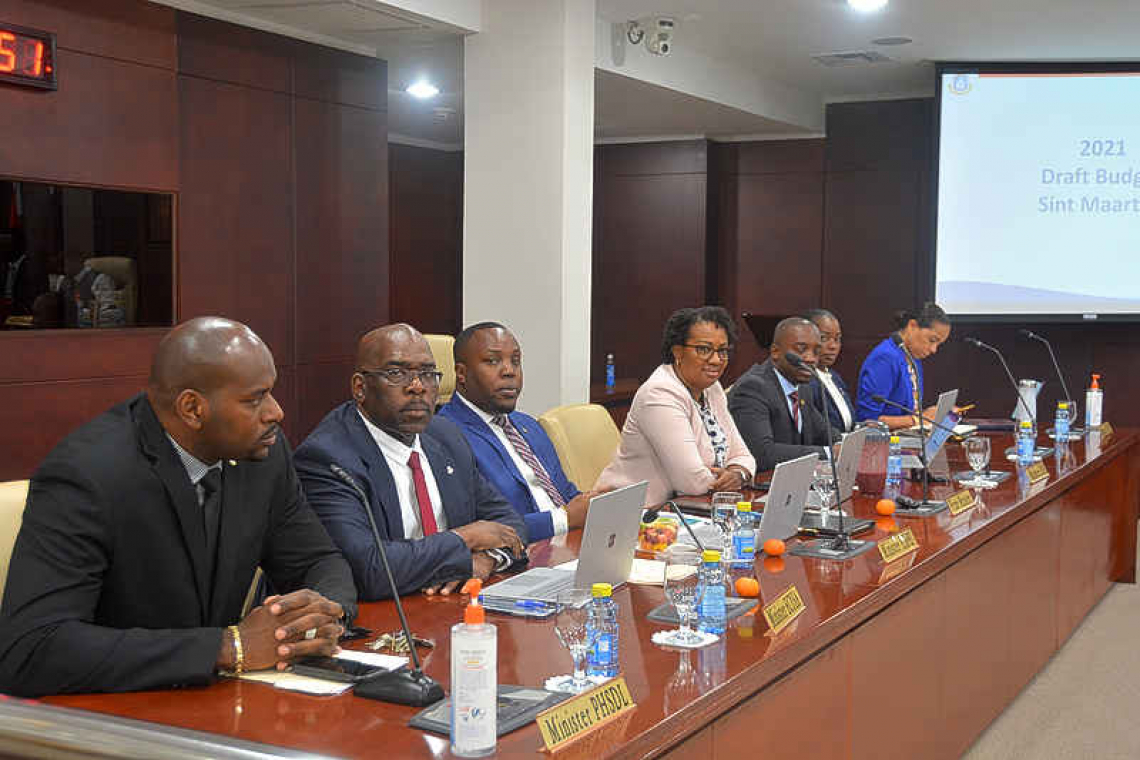 The Council of Ministers at the beginning of Thursday’s budget debate. (John Halley photo)
PHILIPSBURG–Members of Parliament (MPs) on Thursday posed a number of questions to Finance Minister Ardwell Irion, who presented the draft 2021 budget in a meeting of the Central Committee of Parliament.

He also asked about the early 2:00pm closure of the Receiver’s Office; about the issuing of many incorrect automated tax assessments and whether it is not more logical to have an assessment reviewed to be correct before it is issued; and whether government has a policy to handle outstanding tax collection or whether taxpayers are being bullied into paying or losing their property.

He queried whether provisions are made if St. Maarten would have to repay its liquidity support loans in 2022; how much money government is making available to assist Social and Health Insurances SZV to cover its premium losses for 2021; and about the adjusting of the SZV wage limit.

He also quizzed Irion about matters related to Bureau Telecommunications and Post St. Maarten (BTP) concession; the collective sector entities; GEBE; the water distribution network; the sewage collection and processing plant; and the court case that government had with Bearing Point; amongst number of other questions.

National Alliance (NA) MP Angelique Romou asked Irion to give an indication as to how much is spent on postal fees for sending out yearly notices to file taxes and suggested that an alternative way be looked at to make the announcement that would not require the printing of letters and incurring postal fees.

“I believe the current law indicates that every individual must get an invitation to file their taxes. Approximately 30,000 to 40,000 people register to file income tax, hence an amendment should be made which will allow government to make a public statement allowing the public to receive this information unilaterally rather than sending out these individual announcements and assessments,” she said.

“A suggestion would be for the Tax Office to carry out a simple proper survey to see which businesses have closed due to [Hurricane – Ed.] Irma and the pandemic in order also to address the redundancy of paper and its cost. There are approximately 8,000 to 10,000 businesses currently registered so we can save money by finding out if these numbers are accurate before sending out the assessments.”

She also asked Irion to explain why there is a policy in place at the Tax Office whereby people who go to pay/file their taxes are sent back in line after the tax assistant has stamped five pages of their tax forms, as it is apparent that they are only allowed to stamp five at a time.

“Taking into consideration that people are already afraid to file taxes and some avoid paying taxes, why is this made more complicated by sending people back and forth. Doesn’t government want to make money, hence collect taxes?” she asked.

United Democrats (UD) MP Sarah Wescot-Williams said the budget, country package and governing programme were “totally out of synch” and noted that the criticisms by the Committee for Financial Supervision CFT and Council of Advice were not adequately addressed in the budget.

She asked Irion to provide an overview of the payments on behalf of parliament for contracts, etc.; and asked him to explain the approximately 128 million guilders for COVID-19-related expenses and the NAf. 9.5 million to fill vacancies.

She asked what is the basis for the reservation of NAf.  5 million guilders in connection with the cost-cutting laws currently with the Ombudsman, said the tax reform references are inconsistent with the governing programme and the country package etc., and asked what exactly is the plan for this reform?

She also asked Irion to explain the larger objective for the mortgage guarantee fund; what is government’s housing vision; and she wants to be provided with a report on the National Workforce Development programme (Coursera) and be provided the connection between country package items and the budget.

She wants the minister to explain whether there were any actual economic and financial insights of the first five months of 2021 and made several other queries.

Party For Progress (PFP) MP Raeyhon Peterson focused on the budget law itself. One of the issues he raised was that article 5 of the budget national ordinance seems to contradict itself.

“In section 1 of the article, it reads: ‘ This article basically regulates that this national ordinance, given the urgency as regulated in article 127 section 3 of the Constitution, will go into force on the first day after the announcement of it in the Afkondigingsblad.’

“Then, in section 2, it states that in deviation from the first section, this national ordinance will go into force after the Ombudsman’s case in the Constitutional Court has been decided on, and if the verdict is in favour of the Ombudsman, then it won’t go into effect at all.

“Now here is where the confusion lies. First of all, in section one, the urgency, the spoedeisend belang, needs to be proven. There is a list of four cases in which the urgency can develop, because we have a whole national ordinance for that, namely the Landsverordening Constitutioneel Hof. In article 17 of this national ordinance, the 4 situations in which there can be a spoedeisend belang are mentioned.”

Peterson said it is not practical to put a condition within a national ordinance based on an uncertainty, in this case the verdict of the Constitutional Court, which cannot be anticipated.

“It also not practical to mention that the enforcement will also be partially dependent on the advice from the CFT, especially if we have not received this yet. If we as MPs pass laws that leave all this room for interpretation and uncertainty as to what will happen, then we would be irresponsibly passing this draft budget national ordinance, if it is presented as is.” He said he was assured that his points raised will be worked on.

United People’s (UP) party MP Rolando Brison asked Irion whether there were any plans to continue to strengthen and improve the efforts of the Receiver’s Office and other departments; what prevents the minister from going on the open market and trying to attract reasonable competitive loans and if the minister were able to contract on the local market what would be some of the favourable conditions, interest rates, etc. he as finance minister would look at.

Brison also requested an update on whether there were any other strategic assets to be sold after the sale of UTS (now Flow); whether St. Maarten was expecting any additional funds as result of the sale of UTS; whether the actual concession agreement between the government and the airport can be shared with Parliament; and to list all fees/ taxes that are due to St. Maarten that the airport is actually collecting because of its concession.

Brison wanted to know whether Irion had considered synchronising the efforts of the inspection service together with the SZV; what should be done on the finance minister’s end to integrate the audit team ATS into the tax inspection/tax auditing system in the country; whether government is still considering the catastrophe risk CRIFT insurance; whether there are any other insurance payments owed to government to collect for the year 2021; what is currently owed to SZV and what is expected to be paid to SZV in 2021 to assist with the financial debt to SZV.