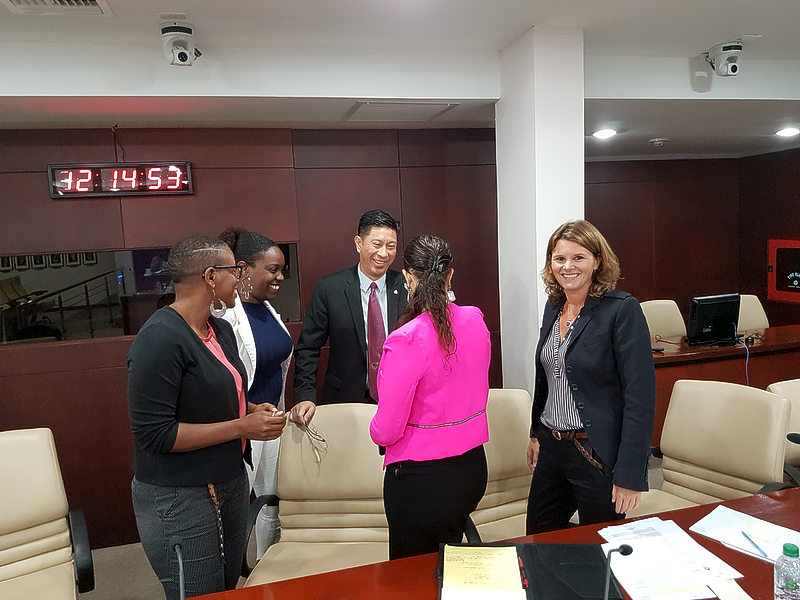 PHILIPSBURG–Whether everything related to the development has been done strictly by the book and the ability of Social and Health Insurance SZV to shoulder the projects, were among the queries made by Members of Parliament (MPs) in Friday’s urgent Parliament meeting with Public Health Minister Emil Lee. The meeting is tentatively slated to resume on Thursday with Lee answering questions posed by parliamentarians.

MPs focused their questions particularly on the SZV and the current functioning of St. Maarten Medical Center (SMMC), rather than on the pending construction project to be executed by INSO, the company that won the bid for the project. The project will now pick up some steam after a court case brought by VAMED, the company originally tipped to construct a new hospital for the country, is to be settled out of court.

Lee did not give a settlement amount to Members of Parliament, saying there is an agreement to keep the settlement amount “confidential.” The settlement itself is still in process and will include the formal withdrawal of the court case VAMED filed after the current Government deviated from the plan of the former Marcel Gumbs cabinet to work with the company. When Lee took office, he opted for a bidding process in which another company INSO came out with a lower bid.

United People’s (UP) party MP Franklin Meyers asked the minister to outline the amount of investment SZV has made in the project and how much was dispersed for so-called investments without any formal agreement being in place to dip into the funds SZV holds from premiums paid by residents.

Meyers also queried the working conditions of the staff of SMMC. He voiced concerns that the ongoing tiff between the medical centre and the Inspectorate of Health over an operational audit has not leant itself to circumventing of regulations for employment of specialists by the minister and SMMC.

Whether there will be a search for a new director of SZV was raised by Meyers. Currently, SZV Director Glenn Carty also serves as Director of United Telecommunications Services UTS Eastern Caribbean. His contract will be up in June.

MP Claret Connor (UP) questioned why an operational audit of SMMC is now on the table. He also asked why did the medical centre’s management agree to the audit, but later did not seem on board with it.

On the development of the new hospital and the reportedly one million euros settlement SZV is to pay to VAMED, due to the change of company for the project, Connor asked Lee whether the two bids were identical with the only difference being the bid amount. INSO’s bid was around US $80 million while VAMED was some US $100 million.

MP Tamara Leonard wants clarification on which of the parties in the VAMED/SZV court case has requested the settlement amount and terms to be confidential. Also on confidentiality, she asked how patient information is safeguarded by the medical centre and the Inspectorate of Health. The MP noted that staff at SMMC feels very targeted by the operational audit and asked for clarification about its purpose.

MPs Frans Richardson (United St. Maarten Party) and Perry Geerlings (Democratic Party) both noted that the out of court settlement between VAMED and SZV is a step in the right direction for the country and to bettering its health care system. This was also shared by MP Hyacinth Richardson (National Alliance).

Those two MPs were joined by MP George Pantophlet (NA) in decrying the original court verdict that was in favour of VAMED. Pantophlet said it was “dangerous” that “a judge has the power to make such far-reaching decisions” on the actions taken by elected officials, specifically Government’s decision to work with INSO instead of VAMED. The judge who dealt with the case “is having a hard time convincing me” that he knows what’s best, Geerling added.

MP Rodolphe Samuel said VAMED is a large company and does not need a settlement and should consider not taking the money and give it instead to better the country’s health care system.