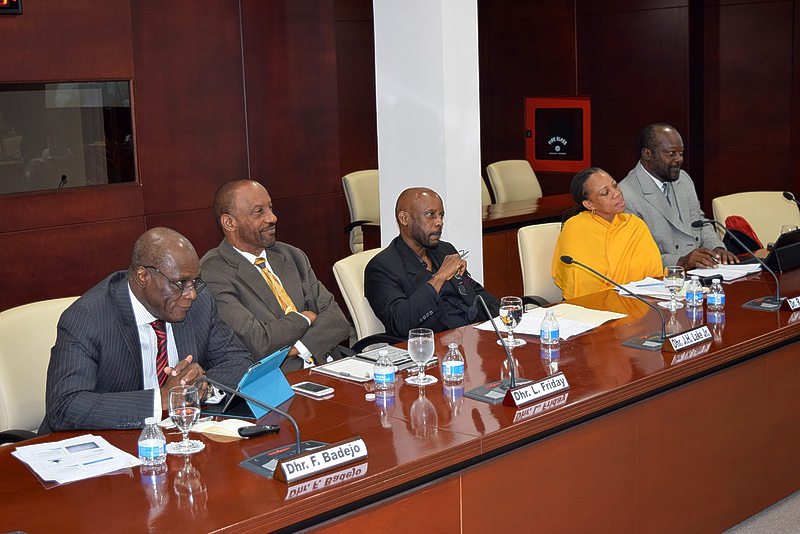 PHILIPSBURG–Independence for St. Maarten was met with a resounding yes from Members of Parliament (MPs) on Wednesday. However, their approaches varied: some want a roadmap to the future, others view independence as a path that should be taken now.

The Independence for St. Martin Foundation raised the topic of independence in the Central Committee meeting of Parliament via a request for a referendum. That request still has to be decided on by Parliament and the Foundation representatives are to be invited back to the legislature to continue the discussion in the coming weeks.
Foundation President Jose Lake Jr. told MPs a “political inequality” existing between St. Maarten and the Dutch Government which is “masquerading as the Kingdom Government … This is reality of the Dutch Ministers being political masters of the St. Maarten people.”
The Parliament “must now step forward and use its power and make a third referendum on independence for St. Martin a reality,” Lake Jr. said.
St. Maarten’s “most productive way of liberating itself from the dehumanizing mental and physical slavery, which it endured for hundreds of years is through a peaceful and popular referendum,” Lake Jr. said. “For it is through the peaceful, fearless and honest exercise of the ballot that St. Maarteners will not only ensure the creation of a democratic society, but also maintain such a society for the way a thing is created, is the way it will be maintained.”
Fellow Foundation representative Rhoda Arrindell issued a call for St. Maarten to be re-registered on the United Nations Decolonization List. That list records those territories under foreign rule that should be made ready for sovereignty by 2020.
St. Maarten was removed from the list in 1954 based on the implementation of the Kingdom Charter.
The Kingdom Charter has never been put to any international scrutiny to verify its conformity with human rights and justice, said Arrindell. “Reinstating St. Martin on the list of non-self-governing territories will bring international focus to the Charter and the many flaws it contains.”
MP Cornelius de Weever (independent) proposed the re-registration on the list be raised in the upcoming Inter-Parliamentary Kingdom Consultation IPKO in the Netherlands. Parliament Chairwoman MP Sarah Wescot-William said the topic should be raised within a tripartite meeting with Curaçao and Aruba, as De Weever is seeking their positions on the matter.
National Alliance (NA) MP George Pantophlet has been a long-time proponent of independence. “We are part of a system where there is no equality … We need the economic power as well as political power.” He questioned, however, if the people “really accept the fact that we are ready for independence.” This is lack of trust in Government and that has a spin off for the mindset for independence, he said. Independence is a “difficult” struggle, “but not one we should give up on.”
Parliamentarian Dr. Lloyd Richardson (United People’s party) said, “This is the beginning of structured discussions on this issue …. We will suffer some setbacks, but we will overcome them … Let’s set this boat a sail.”
“It is our god given right to make our own decisions,” said MP Franklin Meyers (UP), a proponent for independence. “The ability to make our own decision should trump all fears [but] fear should not be the only reason we don’t claim our god given right.”
While in favour of independence, MP Christopher Emmanuel was critical about making a decision based on emotion. “Going independent only because we are a colony is not good enough for me … I understand we should go independent but I want to see the plan,” he said. Reacting to Lake Jr.’s comments about people suffering in the community, Emmanuel questioned if the suffering related to being a colony or because of bad governance and if the country will be better off in health care and education with independence.
MP Maurice Lake (independent) said to become independent, “we need to put our house in order” and a referendum can start that process. Education is “key to moving the country forward … We have to have a sense of direction,” he said.
United St. Maarten Party (USP) MP Frans Richardson said independence has always had his support. “We must go independent no matter what … No one thing has to be fixed before we get independence. No country in the world had everything fixed before they got independence.” He went further by saying he believes the island – Dutch and French sides – should be independent as one country.
MP Hyacinth Richardson said some leaders in the past were not true to the call for independence. “There were no crusaders.” Richardson said he voted independence in the past and would vote again. He added that anyone who wants to go independent must be prepared for that path.
MP Theo Heyliger (UP), who supports independence, said the education of the people must be pushed. People are still very much unaware of what St. Maarten is already doing on its own, he said, pointing to the fact that many people believe the Dutch Government supplements the local budget. This is far from the truth, he said, as the budget is totally funded by the people of St. Maarten.
Another hang up about independence is the loss of the Dutch passport and the freedom to travel it brings, he said. The St. Kitts passport allows its nationals freedom to travel so much so that it has helped that country have a successful citizenship investment programme, Heyliger said.
MP Wescot-Williams said after achieving country status within the Dutch Kingdom, “there is only one way forward for St. Maarten” – independence. The country, though, needs human and financial resources. She said a roadmap is needed to get the country to this desired status. She also said education of the population is key and that nation-building must take precedence now and not when sovereignty is achieved.