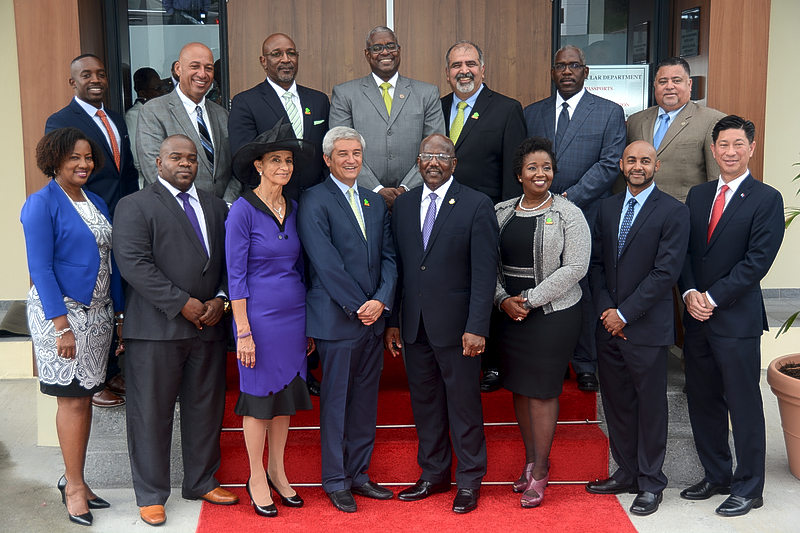 PHILIPSBURG–The fifteen persons elected to office in the September 26 parliamentary election were sworn in as Members of Parliament (MPs) on Monday to make up St. Maarten’s third Parliament since attaining its new constitutional status on October 10, 2010.

Holiday had some words of advice for the MPs-elect before administering the oath. “As you take up your office, I trust that you will use the oath as a guide in the performance of your function on the frontline of our democracy, to promote stable and effective governance for our nation.”

Holiday told the MPs that it was their responsibility to lend support and confidence to form a Government required to manage the affairs of the people; to hold Government accountable for its decisions and actions to foster the interest of the people; and to initiate and/or approve the laws to be used in the administration of justice and governance of the affairs of residents.

“In short, the people elected you to provide the support needed to form a Government, to keep a check on that Government and to put laws in place, all in the interest of the people. You are as such, individually and collectively, entrusted to be on the frontline of St Maarten’s Parliamentary democracy championing good governance,” said Holiday.

“That is, you are entrusted with the task to promote stable governance, aimed at the continued strengthening of regulations and public policies in areas such as public finance, education, employment, social security, health care, environment, waste management, housing and safety; all to improve the wellbeing of our people.”

He said the trust placed in MPs individually and collectively came with high expectations. Taking oath as a representative of the people is therefore a serious legal, personal and public matter.

Holiday said the constitution regulated the separation of powers between the legislative, executive and judicial branches of government.

“Over the past six years, the role and responsibility of the legislature or Parliament, in the governance of our country has been the subject of debate and question. This, because your actions, individually and collectively, are critical to the stable governance and building of our nation,” he said.

Taking an oath, he stressed, is a solemn expression of one’s commitment to perform his or her function independently and with integrity.

“That is, that you have not accepted anything from or given anything to anyone in connection with your election as a Member of Parliament. … Taking the oath is your pledge of allegiance to the King and the Kingdom Charter. … It is your sincere pledge or promise to always help to uphold the constitution of St. Maarten and, finally, by taking the oath you unconditionally swear to always dedicate yourself to foster the wellbeing of the people of St Maarten.

“In taking this solemn oath of office this morning you agree to accept and commit to carry out the serious responsibilities entrusted to you by the people and for the people. And that you will do so with integrity anchored on our constitutional principles,” he said.

The sworn-in MPs held their first meeting at 2:00pm Monday, when the Chairperson and Vice-Chairperson of Parliament were elected (see related story) and MPs bickered over seating.