Home Local News MPs to dust off, tweak, edit code of conduct on table since... 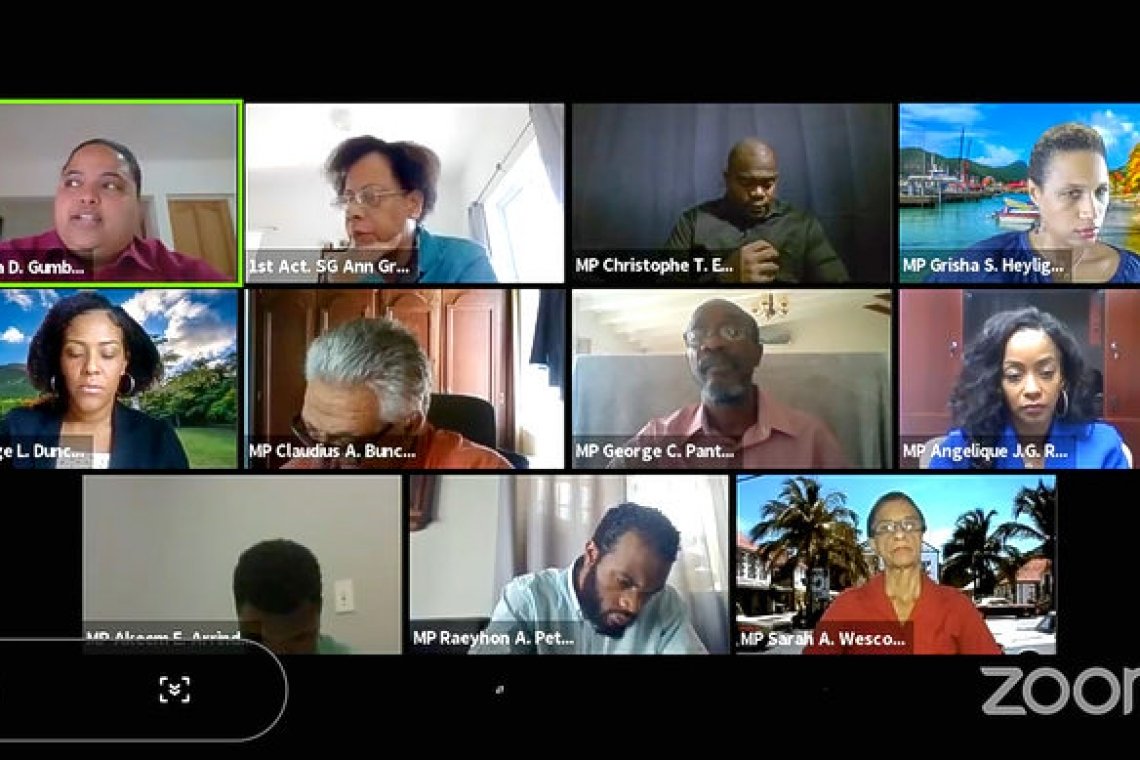 A scene during the virtual meeting on Thursday.

~ Suggestions to add sections on confidentiality, abuse of office ~

PHILIPSBURG–Members of Parliament (MPs) will be dusting off a draft code of conduct that has been on the table untouched for the past three years, to tweak and enhance certain articles and possibly make new additions.

The draft code of conduct, intended to govern the behaviour of MPs, was presented to Parliament back in 2017 by then-Chairperson of Parliament’s Ad Hoc Committee on Integrity MP Sarah Wescot-Williams.

Current Committee Chairperson Melissa Gumbs of Party For Progress (PFP) urged MPs on Thursday to submit their suggestions on how the draft document can be tweaked and enhanced, following which a meeting will be scheduled where the code will be edited. The intention is to have the code eventually instituted for Parliament.

Current Chairperson of the Ad Hoc Committee on Integrity Melissa Gumbs told MPs during a meeting that prior to calling the meeting she had done some research on codes of conduct in other parts of the region such as St. Kitts, Jamaica, and Trinidad and Tobago, to see along what lines they were thinking with their codes and she believes the current code on the table needs “more meat.” She said also that some topics, such as conflict of interest and gifts, should be clarified.

She agreed with another MP that there should be a code of conduct for civil servants and the wider government apparatus. Codes of conduct, she said, govern behaviour while ethics govern decision-making. Gumbs’ goal is to also have the Ad Hoc Committee on Integrity transition into a Permanent Committee.

United St. Maarten Party (US Party) Member of Parliament (MP) Claudius “Toontje” Buncamper said the draft presented by Wescot-Williams back in 2017 is clear on what MPs should and should not be engaged in and noted that it seemed to have been a reflection of the several integrity reports made in 2014 when the country had been undergoing “turbulent” times, integrity issues were at the forefront, and matters such as screening of ministers had been introduced.

He said many strides have been made since then. He alluded to the Ministry of Public Housing, Spatial Planning, Environment and Infrastructure VROMI, for instance, which put measures in place to avoid integrity issues in areas such as public tendering.

While regulating the behaviour of MPs via a code of conduct, legislators should be cautious about the privacy of MPs and their families, because whenever information has to be provided, that of families is oftentimes required. Buncamper was concerned about MPs being paid handsomely to perform their duties and noted that they should not hold two or three functions while holding office as a legislator. It cannot be, he said, that MPs are being paid to work five days a week, but only show up to work a fraction of the time.

He also supports the Ad Hoc Committee on Integrity becoming a Permanent Committee of Parliament. He said that while this had been a wish of parliament in the past, it was never a desire, or it would have already been accomplished. He called for MPs to work on the document “soonest”, as it has been more than three years since it was presented, but never finalised.

PFP MP Raeyhon Peterson concurred with Buncamper, noting that the draft should be made official, adding that it is essential for the Integrity Committee to become a permanent committee of Parliament.

Peterson believes the draft on the table should be a bit more comprehensive and suggested that a statement be made in the draft discouraging acceptance of gifts by MPs. Sections should also be added to address issues such as confidentiality, influence, abuse of office, scope of code of conduct, the duties of an MP as it relates to acting in the interest of the public in upholding the law, etc., and although MPs enjoy parliamentary immunity, showing basic respect when in parliament.

United Democrats (UD) MP Wescot-Williams said that when the discussions began about a code of conduct years ago, MPs back then found different codes of conduct from different countries around the world and the discussions kept continuing. The Secretary-General of Parliament attempted to structure the various points into a document that MPs could have discussed.

There was a lot of filibustering in the discussions at the time and one of the issues of contention was financial disclosure, which she said should be taken out of the document and discussed. The issue of being a full-time MP was also an issue that she said keeps returning.

National Alliance (NA) MP George Pantophlet said the discussion on a code of conduct had been ongoing for quite some time and it is important that parliament pursues this issue and has it finalised. He alluded to discussions years ago about a code of conduct for civil servants. He wants these issues addressed with government-owned companies, which he believes should also have a code of conduct.

NA MP Solange Duncan said that while she is not a member of the Committee, she looks forward to working on the code of conduct. She believes that more “meat” should be added to the draft on the table and shared a bit about her own experience as an Integrity Officer at the Justice Ministry some time back and creating a code of conduct at the time and attending a number of integrity trainings. A code, she said, is necessary for every organisation and is lacking for parliament.

NA MP Angelique Romou said the issue will have her support to get it moving forward. She said there seems to be some overlapping in the document that should be addressed and indicated that MPs do need to work on the draft and make it a reality.