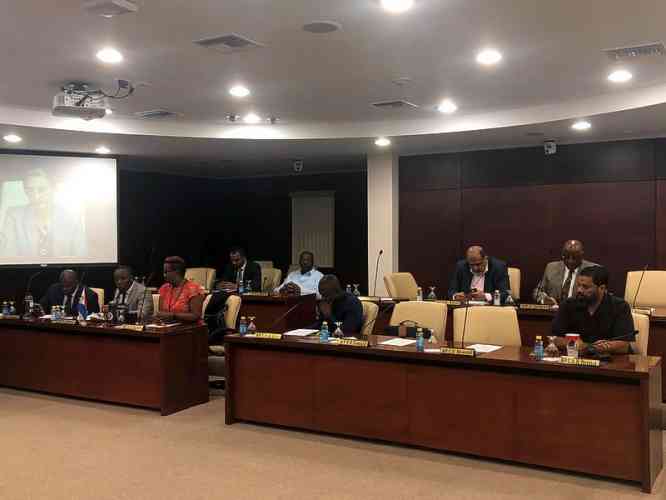 PHILIPSBURG–Parliament approved on Tuesday travel arrangements and provisions for Members of Parliament (MPs) to attend a number of committee meetings of the Latin American Parliament Parlatino.

The approvals were given during a meeting of the Central Committee of Parliament. Parliament had received several convocations for meetings to approve MPs attending the Parlatino meetings, which are scheduled for months of August and September.

MPs Sidharth “Cookie” Bijlani (United Democrats (UD)) and Silveria Jacobs (National Alliance (NA)), who later declined to attend, were approved to travel for the meetings of the Committee of Agriculture, Cattle Raising and Fishery, and the Committee of Environment and Tourism, which will be held in Guatemala on August 29 and 30.

MPs Bijlani and Rolando Brison (United St. Maarten Party (US Party)) were approved to attend the Committee of Health meeting in Panama on September 5 and 6.

MPs Egbert Jurendy Doran (NA) and Jacobs were approved to attend the Committee of Labour, Social and Legal Affairs meeting in Panama on September 5 and 6.

Attending the Committee of Economic Affairs, Social Debt and Regional Development meeting in Panama on September 12 and 13 will be MPs Brison and Chanel Brownbill (UD).

Approved to attend the Committee of Education, Culture, Science, Technology and Communication meeting in Cuba on September 19 and 20 were MPs Bijlani and Brownbill.

MPs Doran and Christophe Emmanuel (NA) will attend the Committee of Gender Equity, Childhood and Youth meeting in Cuba on September 19 and 20.

Chairperson of Parliament Sarah Wescot-Williams said the rules and regulations adopted by parliament in relation to work visits are applicable MPs’ travel to these meetings.

The hidden skeleton behind the border controls on St. Martin. |...