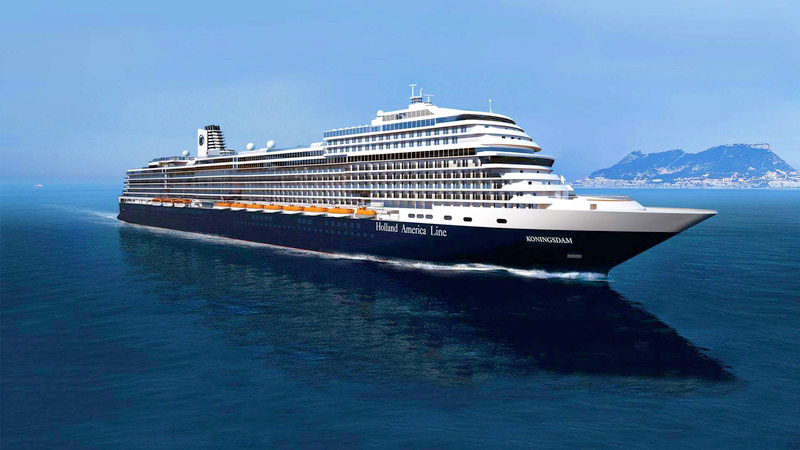 PORT ST. MAARTEN – The fifth new cruise vessel on its inaugural call for the month of November is ms Koningsdam of Holland America Line (HAL) which will dock on Saturday, November 26.

Saturday will also be the second day in the month of November that the destination will experience seven cruise ships in port.  The first day was on Thursday.  There will also be a six ship day on November 30.

Port St. Maarten will be welcoming the new vessel the largest in the HAL fleet to its shores on Saturday with the traditional plaque exchange and words of welcome.

HAL took delivery of ms Koningsdam from the Fincantieri Shipyard, Italy in March 2016.  This is the first new Pinnacle-Class ship featuring innovative venues and new experiences.

ms Koningsdam set sail in April 2016 and is HALs newest cruise ship to join its fleet.  The 99,500-ton vessel can accommodate 2,650 guests and also has 1,036 officers and crew.  The debut of this new vessel represents a high point in HALs history.

In May 2016 at a dedication ceremony held in Rotterdam, Her Majesty Queen Maxima of the Netherlands became godmother of the Koningsdam.  HAL has a long history with the Dutch Royal Family, the Netherlands and the City of Rotterdam.  The company began in the Netherlands more than 143 years ago.

The new cruise ship has been on its Premiere Voyage homeporting out of Amsterdam, the Netherlands, sailing a series of northern Europe and Baltic cruses before returning to the Mediterranean in September.

ms Koningsdam is homeporting out of Port Everglades, Florida spending the 2016-2017 winter season exploring the Caribbean including destination Sint Maarten sailing seven to 11-day voyages up to March 2017.

Holland America Line is widely recognized as a leader in the premium segment of the cruise industry. The company’s fleet of 14 ships annually offers more than 500 cruises to 415 ports of call in 98 countries, territories or dependencies. From one-day mini-vacations to once-in-a-lifetime Grand World Voyages of more than 100 days, the line visits all seven continents to call at a variety of exotic, tropical, historical, cultural and adventure-filled destinations.

Celebrating its 140th anniversary in 2013, Holland America Line has carried more than 11 million passengers from Europe to the New World and to vacation destinations across the globe since its founding. Today, it carries more than 800,000 cruise passengers a year.

HAL is headquartered in Seattle, Washington.