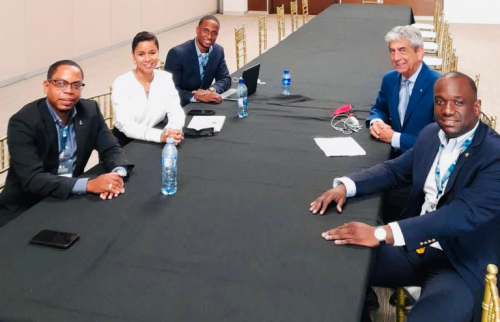 Minister Lawrence, Port CEO Gumbs and support staff were in Panama City for the 27th Florida-Caribbean Cruise Association (FCCA), the Caribbean’s largest and only official cruise event in the region, which took place from October 18 to 21.

One of the key meetings held by Minister Lawrence, accompanied by Gumbs, was with MSC Cruise Chairman for North America, Rick Sasso. “MSC is 1,000 per cent interested in working with St. Maarten,” stated Sasso. “We look forward to exploring opportunities with St. Maarten as we see great potential and a great product.”

MSC Cruises is the world’s third-largest cruise brand, headquartered in Geneva, Switzerland, employing over 30,000 staff globally. The cruise line sells cruise holidays in many countries around the world. MSC Cruises has six classes of vessels, and the fleet is expected to grow.

MSC is rolling out with four new ships from November 2022 to April 2023. In total MSC expects to grow to 23 cruise ships by 2025, with options for six vessel orders in place through 2030.

Both Lawrence and Gumbs had held initial discussions over the past weeks with MSC Cruises, discussing alternatives to turn one of their newest ships MSC Seaview into a homeport vessel out of Port St. Maarten as early as December 2021. MSC Seaview was launched in 2018 as part of the Seaside Class and has a guest capacity of over 5,000 passengers.

Minister Lawrence and Gumbs said on Thursday that this is potentially a great opportunity for the destination. Operation teams from Port St. Maarten Group and MSC Cruises will meet to discuss and review logistical operations to make sure that all is up to par, assuring smooth and efficient turnarounds can be accomplished.

Based on current discussions, the vessel may have up to 85 per cent occupancy in guests who will travel to the destination through multiple charter flights from Europe, prior to embarking on their Caribbean cruise out of Port St. Maarten.

CEO Gumbs also alluded to the fact that he had preliminary discussions with Princess Juliana International Airport (PJIA) CEO Brian Mingo last week regarding the potential to cater to such an operation during the week.

“The initial talks are about catering to this opportunity for the next four-five months as the cruise line assesses challenges in the other destinations that generally cater to this magnitude of operation,” Gumbs said. “Port St. Maarten Group identifies additional investments will be required in homeporting facilities in order to strategically move ahead as a major cruise destination in the North-eastern Caribbean, if it is the intention of the destination to cater to this scale of operations structurally in the future.”

During the meetings held in Panama, great potential was identified as St. Maarten is well positioned and already functions as a hub for the neighbouring destinations within the region, further strengthening the destination’s potential to tap into such opportunities.

“We are simultaneously looking at strategically planning with MSC Cruises from an investment perspective for long-term initiatives and becoming strategic partners in future port developments,” Lawrence explained.

The minister said that Port St. Maarten Group has his full support in terms of its strategic objectives. He also looks forward to the engagements Port St. Maarten has with the industry going forward with regard to their strategic initiatives, which were recently presented to the St. Maarten House of Parliament.

Gumbs said that with MSC Cruises’ potential penetration of the destination’s homeporting niche, it also diversifies the product mix of country St. Maarten along with factors beneficial to the cargo pillar, where provisioning of vessels and providing additional auxiliary services are concerned.