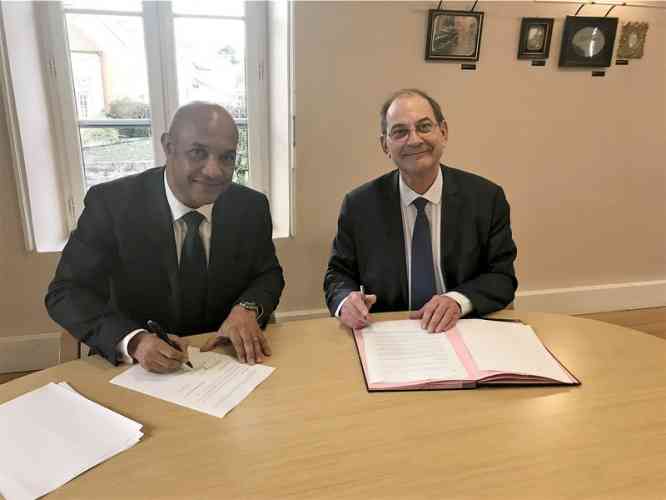 MARIGOT–The Collectivité’s multi-annual investment and “catch-up” plan is in the process of being finalised with its main objectives to be presented at the next Inter-Ministerial meeting on March 12, it was disclosed from President Gibbs’ latest Paris visit.

The Collectivité can benefit from credits from Grand Plan d’Investissement, notably to speed up transition to ecology. Public establishments of the Collectivité and local companies will also benefit from support of the Caisse des Depots et Consignations.
The Collectivité gave more details of the President’s recent round of visits to the French Ministries in connection with continuing negotiations over aid for the reconstruction of St. Martin.

In another important development, President Emmanuel Macron indicated that insurance payments will be accelerated as of March 1. Only 20 per cent (200 million euros out of a billion euros) has been paid four months after Hurricane Irma (hotels receiving just 12 per cent). Macron described this as “unacceptable.”

Gibbs was accompanied by Tourism Director Stéphanie Bessière, Director of General Services (DGS) Philippe Mouchard and Jénovefa Eche in charge of Institutional Relations.
He began his visits by presenting St. Martin’s Tourism Development Strategy 2017-2027 validated by the Territorial Council in November 2017, as well as other tourism needs to the Foreign Affairs Ministry, Finance Ministry, Ministry of Overseas Territories and Atout France, St. Martin’s principle promoter of the territory.
Gibbs was also accompanied by two hoteliers who were invited to talk about the urgent need for reconstruction of the hotels.

Gibbs visited Bry-sur-Marne on January 24 to visit the town’s Mayor Jean-Pierre Spilbauer to renew the convention on the twinning of Marigot and Bry-sur-Marne. The youth are at the heart of the political policies of both territories, along with the possibility for exchanges in sports, language, and cultures between the schools of the two territories. The convention also initiates an annual plan of action that will be prepared before this summer to have it ready for September.

Gibbs thanked the elected officials and population of Bry-sur-Marne for its mobilisation in favour of St. Martin after Hurricane Irma. The town lent logistical support to the Maison de St. Martin while the Mayor announced the sum of 85,000 euros had been earmarked for the reconstruction of schools in St. Martin.

Gibbs was in Brussels on January 25 for a meeting with European Commissioner Corina Crétu to review the European funding envelopes available. Some 49 million euros has been set aside for reconstruction in St. Martin after Hurricanes Irma and Maria. Crétu assured that she would defend St. Martin’s needs with Minister Mezard in charge of the Cohesion of Territories.

The financial requirements for public infrastructure (roads, public and administrative buildings, utility networks and their installation) were reviewed at a meeting with President Emmanuel Macron and Overseas Minister Annick Girardin on January 30. President Macron was made aware of the necessity to accelerate the reconstruction of public buildings and, above all, school buildings. Gibbs stressed he did not want a haphazard return to school in September.

The 46 million euros from Fonds de Solidarité de L’Union Européenne (FSUE) will be an envelope directly for St. Martin and separated from the Region of Guadeloupe, Macron agreed.

The necessity of improving statistical information was also discussed. Macron said he was in favour of projects to improve the tourism offer and to optimise defiscilisation (notably on demolition and rebuilding of hotels).

Lastly, the President of the Republic underlined the significance of the pre-paid Cohésia debit card as an emergency measure, and noted it can be adapted for managing the social benefit Revenu Solidarité Active (RSA).