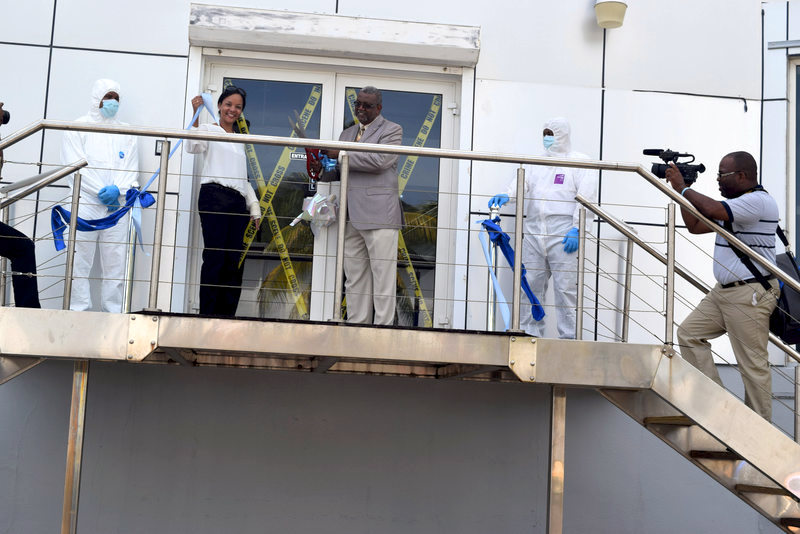 COLE BAY–The country’s first forensic lab and professional shooting range at the old Soremar Building on Orange Grove Road is yet to be used for its intended purpose.

The Daily Herald understands that funds were not allocated to purchase equipment for police.

The building on Thursday.

Former Minister of Justice Edson Kirindongo, assisted by Police Commissioner Denise Jacobs, stood in front of the same building on July 28, 2016, and officially declared it open in the presence of Governor Eugene Holiday, Members of Parliament and the Council of Ministers.

The Police force and Ministry of Justice have named the building twice. First, it was branded the Justice Institute of St. Maarten and now another banner has been placed at the building by police calling it the Multifunction Centre.

The building was purchased by government last year and handed over to the Police Force for its forensic lab and shooting range, but the Justice Ministry fell short of providing the funds for the building to function. The operations centre for the Philipsburg camera project was to be placed at that location.

This newspaper contacted the Ministry of Justice on Tuesday and spokesman Fernando Clark stated that no new information is available about the building at this moment. When asked when plans for the use of the building will materialise, he stated that Minister of Justice Rafael Boasman still had to look into this matter.

At the opening, former Minister Kirindongo described the opening of the building as a project that had been six years in the making, “another milestone in the history of St. Maarten.”

He saw the lab growing “step by step” with the goal of not only serving St. Maarten, but also it is hoped that in the long term the lab will have service agreements with the Netherlands and the United States. Similarly, the Minister had hoped the shooting range could be used for joint training with neighbouring agencies.

Speaking about the lab at the time, Deputy Chief of Police Jacobs said it used to be a “one-woman show” with one officer shouldering the majority of the responsibilities, which has grown into a team that includes two fingerprint experts, two digital forensic experts and an engineer. The team is moving into cyber forensics with help of the International Criminal Police Organisation Interpol.

Police spokesman Chief Inspector Ricardo Henson directed this newspaper to the Justice Ministry and stated that equipment was the only thing lacking.