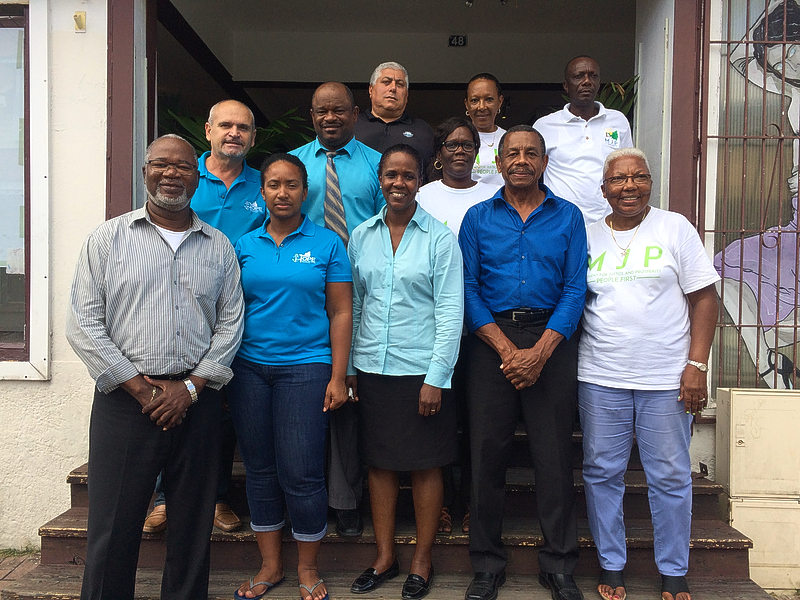 MARIGOT–In a development widely expected following last Sunday’s result in the first round of the Territorial Council Election, Louis Mussington’s Movement for Justice and Prosperity (MJP) and Jules Charville’s Generation Hope have merged to form a new list in a concerted effort to rein back the advance Team Gibbs obtained, and at best to win the final round this coming Sunday.

Much will depend on mobilising and changing the minds of the 12,000 voters who abstained last Sunday and the campaigning rhetoric in the last few days will no doubt be ramped up a few notches.

Gibbs won a decisive victory last Sunday but failed to get the 50 per cent plus of the votes cast and the 25 per cent of registered voters (5,071) needed to win the election by absolute majority.

The pair confirmed the new alliance at a press conference Wednesday afternoon, noting the new party name is Alliance for Hope, Justice and Prosperity with its slogan “Country above Self.” The new list now has four members added from Generation Hope.

They are: Charville at number three on the list, Angeline Laurence at number six, Denis Prisca at number 14 and Victor Paines at number 19. Mussington remains head of the list.

The latest casualty from the MJP list after Raymond Helligar’s departure is Pierre Aliotti who was demoted from fifth on the list to seventh, and subsequently decided to leave.

It should have been a three-way alliance with Alain Richardson’s MVP party, who came in third place last Sunday, but talks broke down with Richardson and he has decided to go it alone. Negotiations between the three parties have been going on in earnest behind closed doors since Monday to meet the Préfecture’s Tuesday deadline for lists to be submitted.

The lists of MVP and Team Gibbs remain unchanged for the second round.

In a brief mention about Richardson not joining, Mussington alluded to the scenario of “it not being a win-win situation for MVP.”

“We wanted total unity so it is regrettable but we remain steadfast in our goal,” said Mussington. “There are still strong possibilities of securing victory if we can sway the minds of those voters who abstained last Sunday.”

He said the programmes of Generation Hope and MJP are very similar and the fact that Charville and Mussington go back a long way as friends has also facilitated the alliance of both teams.

Charville said in his opinion voters who stayed home and abstained from voting was a sign of protest over the divisions as shown by the large number of lists (eight) that created confusion.

“We sensed this even before the first round and before campaigning and that led to a “gentleman’s agreement” between Mussington and myself. We kept our word but we didn’t expect Gibbs to get such a big lead and we thought our two parties would have done better than they did.

“So it called for a stronger alliance with the third party but it didn’t work in the way we wanted,” Charville explained. “It should be noted that the population was asking for an alliance before the election, so in a sense the people are happier now.”

He stressed this is not a party just put together to win next Sunday.

“It’s about winning and being able to work together hand in hand for the benefit of this country. Like the slogan says, it is exactly what both parties are about. It’s only natural that we come together and do what we have to do for the country.”

Both Mussington and Charville suggested that many persons had voted for a certain candidate, some without knowing why, and then regretted their decisions.

“We have to explain the risks to them in a concrete manner so they will think twice before voting again, and that voting for the alliance will be the way to go,” Charville added.

Out of the picture for the second round are Aline Hanson’s party “Let’s Continue for St. Martin,” New Direction, MOCSAM and Soualiga Movement. Mussington said he hopes to get the endorsement from New Direction. MOCSAM has said it will not endorse any party and has left its 418 voters to make their own choices.

“At this point we are very encouraged,” continued Mussington. “Gibbs put everything he had with money and means into winning the election in one shot. The fact that it didn’t happen has given us a chance. It would set a very dangerous precedent to be putting all the power into Team Gibbs. It’s a danger for the future development of this country. So we have a moral obligation to resist and be victorious on Sunday. The powers must be shared in a way that different groups and personalities can form the political landscape of the country.”