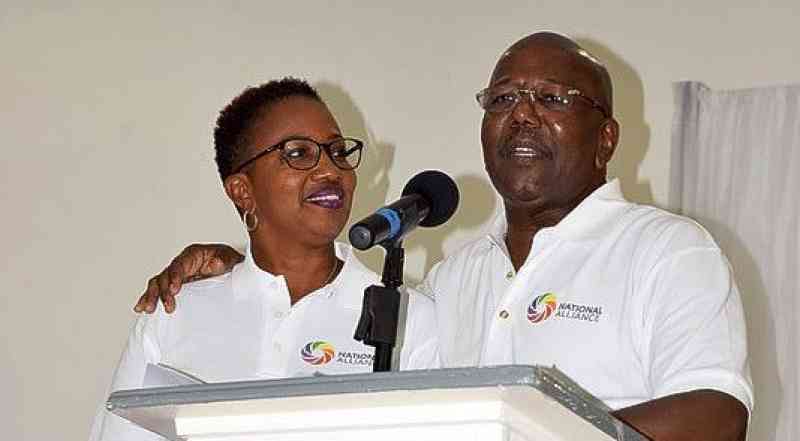 BELAIR–National Alliance (NA), the country’s second oldest party, has a woman at its helm under the theme “Always Progressing,” following its general membership congress held in Belair Community Centre on Wednesday night.

Taking up the baton from former Prime Minister William Marlin is Education and Culture Minister Silveria Jacobs. She has served as the party’s deputy leader since 2014.
Jacobs, the only candidate for the leadership, was elected by the collective acclaim of the congress delegates.
She said NA has never won an election by itself. The wins were the collective strength of NA supporters. She called on supporters to bring two or more people on board.
“You have the power to change lives. … You make sure we back again,” Jacobs said.
The party needs a four-year term “to change the system” to better the country.
She promised that NA will not be “an election party.” It will continue to work after the election as it is working now, she said.
Marlin said in his speech as outgoing leader that the passing on of the leadership to Jacobs was “keeping a promise made in 2014” at the party’s congress. “The power of women will be felt this election,” he said.
This year marks Marlin’s 40th year in the political arena and his 20th year as party leader. The party’s leadership was passed to him by the late Vance James Jr.
Recapping his political career and the failings of other political parties, Marlin, who received a standing ovation, said he “suffered the wrath of the Dutch,” but he was “going nowhere.”
As to his place on the NA’s list of candidates, Marlin said he will be “at the bottom the list” to “carry load” to boost the party’s solid foundation.
He promised that all NA ministers will pass the screening following the upcoming election.
Member of Parliament Rodolphe Samuel was elected as the party’s deputy leader. The other candidate for the post was MP George Pantophlet. Samuel received 66 of the 103 ballots cast by congress delegates from the 16 districts, Pantophlet 30, and seven of the ballots cast were invalid.
In its continued preparation for the February 26 snap parliamentary election, NA introduced seven “new” candidates: Ludmilla York-Duncan, Anna Rabess-Richardson, Egbert Jurendy Doran, Jelani Gumbs, Leroy Vlaun, Dennisen Philips and Leonard “Lenny” Priest.
York-Duncan and Doran were the children of former NA candidates former Justice Minister Roland Duncan and current Minister Plenipotentiary Henrietta Doran-York. Gumbs’ aunt Eline Gumbs-Vlaun served as an elected representative with NA’s predecessor, St. Maarten Patriotic Alliance (SPA).
“Coming back home” was former SPA Finance Commissioner Leonard “Lenny” Priest. He led its own One St. Maarten People Party (OSPP) in the past two parliamentary elections. Joining him on NA slate is former OSPP candidate Dennison Philips.
Former United St. Maarten Party (US Party) candidate Anna Rabess-Richardson has joined the NA line-up.
All new candidates delivered impassioned speeches calling on the electorate to give NA a majority of eight or more seats in Parliament to govern for the full term of four years.
Party President Cedric James called the congress “special” because NA is poised to change its leadership. He, like others, said NA supporters should be proud of the party’s accomplishments.
NA has “no ship-jumpers on board,” but is now facing an election due to “the selfish motives of those who cannot dealt with accomplishments of your party – the National Alliance,” James said.
Infrastructure VROMI Minister Christophe Emmanuel announced in his address to the congress that a concession agreement has been signed and approved by the Council of Ministers for the start of a waste-to-energy plant. The decree is “on the Governor’s desk for signature.”
Emmanuel promised: “In one year, we will open Mullet Bay.” This process has already commenced, he said, with the planned construction of a two-tower hotel in the area.
Supporters are called to rally with the party in front of the old Government Building on Nomination Day, Friday, at 1:00pm to march to deliver the list of candidates to the Central Voting Bureau in Parliament House.