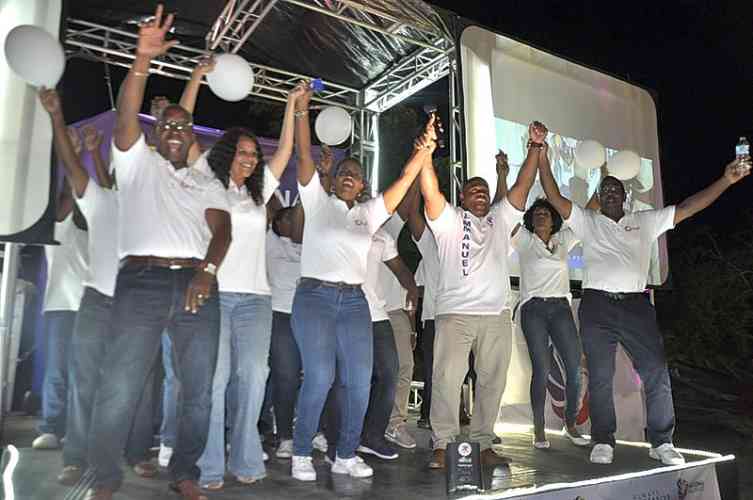 DUTCH QUARTER–National Alliance (NA) leader Silveria Jacobs says residents in the country are very concerned about instability in government, and the party is seeking a clear majority of 8, 9 or 10 seats to offer this stability.

Speaking at the party’s first public meeting in Dutch Quarter on Saturday evening, Jacobs, backed by the party’s 22 other candidates, told attendees that as the party canvasses the community during its campaign and asks about the concerns of the public, one of the biggest concerns of residents is instability in government. She said to achieve this stability, the electorate should vote for NA. She suggested that it is not wise to vote for persons with a track record of throwing down government for personal gain or for a team that has already enriched themselves and their families.
“They are out there trying to pretend they will stop elections. It’s tricks,” she said, adding that NA can provide “true stability” in government. In National Alliance, you will have a government with people who think with heart and soul for the people. Not make decisions based on who will get fat pockets. How can we have a billion-dollar Front Street and still have shacks? How can we have entrepreneurship at heart, but no tax incentives for people to start businesses?” she said.
She said the leadership of the NA “is not fake.” After the devastating Hurricane Irma in September, while government had been working hard, the DP had been busy plotting to use the disaster of natural proportions to create a human disaster. When “they knock down and throw down” former Prime Minister William Marlin, “they thought” that this would have affected the party, but she said the party has risen with innovative new leadership that she possess.
The party also has strong millennials on its team and is backed by a strong ideology rooted in what National Alliance stands for. The party’s ideology, she said, is a socio-democratic one, which is rooted in the people of St. Maarten, and which places the people of the country first. The party is one that builds homes, repairs schools and “fixes the mess” created by others.
She was critical of political opponents using education institutions for political mileage. She alluded to the University of St. Martin (USM) closure issue, which Jacobs eventually solved with a Memorandum of Understanding (MOU) with the institution, as being used to “score political points. It was purely political.”
Former Prime Minister William Marlin said when the NA promised to complete the new government administration building, it stuck to its promise and completed it; when the party promised to balance the country’s budget, it accomplished this more than once and when the party promised to clear off the debts left behind with the general pension fund APS and Social and Health Insurances SZV, it did this as well. “We stuck to our plan,” he said. Marlin urged the electorate to give the party the full mandate at the polls to govern as NA has “unfinished business” to continue in governing the country.
He said while the party was busy working after hurricane Irma, others had been “cooking up plans” to throw down the government. The true reason for breaking the former coalition, he said was not the hurricane. The true reason was revealed at the United Democrats (UD) public meeting last week, when he said UD candidate Sarah Wescot-Williams revealed that she, US leader Theo Heyliger and others had been in discussions for a long time on reuniting the Democratic Party (DP) and the United People’s (UP) party.
Marlin said the NA has a competent team and assured that its candidates will pass screening to become ministers unlike the case with the UP, whose ministerial candidates have failed screening over and over again. Marlin stressed that this is an important election and urged the electorate to go out in numbers and give NA a clear majority.
NA number two candidate Christophe Emmanuel accused the current coalition government of “robbing” the country. He said before the former government left office everything had been signed off on for a project to assist the people. He called on the coalition to answer the people. He said also that NA had been working for the people. He said while persons cannot do anything about Hurricane Irma, something can be done about “Hurricane Sarah” and the UD, whose party he referred to as the “United Demo-rats.” He said there is a reason why all the ship jumpers have been united on that one party list.