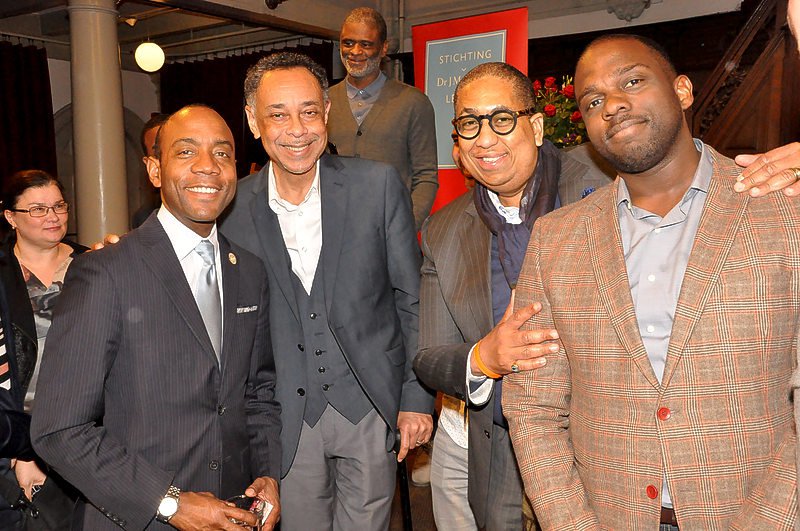 AMSTERDAM–President of the American National Association for the Advancement of Coloured People (NAACP) Cornell William Brooks shared a strong message at the Dr. J.M. den Uyl lecture in Amsterdam Monday evening, of uniting forces and rising up in these “anguishing moments for democracy” worldwide. “You can’t confront politics of hate with politics of conformity and timidity.”

For close to an hour, guest speaker Brooks had the full attention of the audience of some 200 people at the Rode Hoed in Amsterdam. The title of his lecture “Politics of hate and democracy of hope” addressed the political situation in the United States, the Presidential elections, the voting system, the role of progressive movements and the increased feelings of hate and insecurity.

According to Brooks, the current times made it necessary for the civil rights activists, millennials and pre-millennials to learn from each other, and to use modern techniques of social media. “We must become a twitter-age civil rights movement; embrace old values and new technology.”

He said that the way to respond to the populist politicians, the right-wingers and those who spread hate was by seizing the moment to grow and to deepen the support. “This is the time to expand our movement, make use of the tragic moment provided to us,” said Brooks, who mentioned that the membership of the NAACP has grown in the past months.

Looking back at the Presidential elections of last November, the NAACP President said this event took place amidst economically unstable times where people from the different social classes felt insecure about their income and rising concerns about immigrants. He said that the current voting system in the US was “designed to suppress voting.”

Brooks made a link between of the rise of “Trumpism” and the fear and anxiety that reigned in the times of the Ku Klux Klan (KKK) in the 1920ies. At that time, the NAACP responded very strongly to the terror spread by the KKK and the associated killings. “We took on the Klan at a great risk of our lives.”

These times are calling for decisive action, said Brooks. “You cannot take compromise, moderation; you simply cannot afford to stand on the sidelines. It is not the time to be despondent, but to mobilise, to rise up. We have to take it head on. We must stand tall on and affirm our values.”

According to Brooks, there has not only been increased hate against black and brown people, but also against lesbian, gay, bi-sexual and transgender persons (LGBTs), Jewish people and Muslims. He said that the hate displayed by some young people at the schools was the result of getting the wrong example from their parents.

Brooks received a royal applause from the audience, not only at the end, but in between as well. A highly inspiring speech, said Chairman of the organising foundation Job Cohen, former Mayor of Amsterdam and former leader of the Labour Party PvdA.

Founded in 1909, the NAACP is the oldest, largest, and most widely respected grassroots-based civil rights organisation in the US. Brooks, a civil rights attorney, social justice advocate and fourth generation ordained minister, became the 18th person to serve as chief executive of the association in 2014. He is a graduate of the Yale Law School.