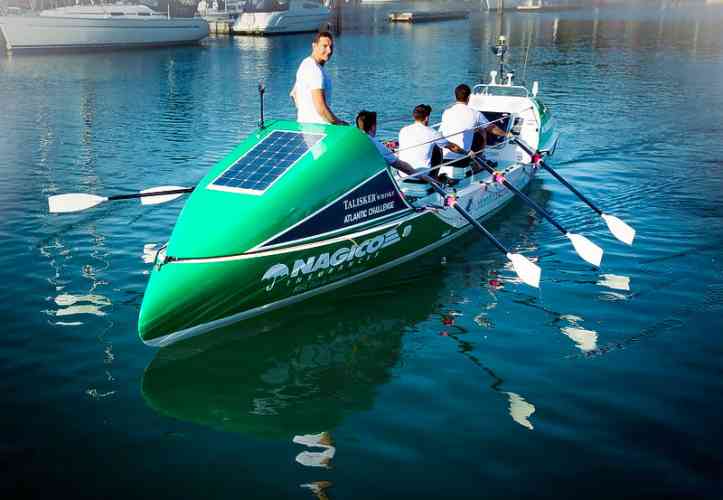 Team members on the boat.

The vessel that will be used for the Atlantic crossing.

PHILIPSBURG–The NAGICO Insurances Group has sponsored the Atlantic Discovery four-man team, who are set to row across the Atlantic Ocean in a test of physical and mental endurance in the Talisker Whisky Atlantic Challenge.

The Challenge begins off the Canary Islands on December 12, when the Atlantic Discovery team will start a row of 3,000 miles unsupported, skirting the hurricane development corridor, to finish in Antigua.

“We have chosen to back Atlantic Discovery’s exceptional human endeavour because it resonates so closely with NAGICO’s story,” explained Group Chief Strategy and Development Officer Kyria Ali. “Hurricanes Irma and Maria dealt devastating blows to the Caribbean last year and despite these darkest of moments, when we were all surrounded largely by despair, NAGICO has proven that we are a group that can be trusted to deliver.”

The team will be rowing for two hours on, two hours off for about 40 days, making their own water, eating rehydrated ration packs, sleeping 90 minutes at a time in two small cabins, facing the elements and enduring the full might of the sea. “This remarkable team is taking on a challenge that, to the average person, seems impossible to achieve,” Ali said. “The expedition is about resilience, teamwork and becoming stronger. This is NAGICO’s story.”

Speaking on behalf of the Atlantic Discovery team, Cameron Parker, a Zurich-based director at Swiss Re, said that the alignment between NAGICO’s values and the team ethos was the factor that made the partnership a reality. “We are absolutely honoured that the NAGICO Group has chosen to come on board as our primary sponsor. The distinctive green NAGICO branding of our ocean rowing boat, Ellida, will mean that this dynamic and versatile insurance group, one with a significant footprint in the Caribbean, can tell their remarkable story: how they stand tall against adversity; support the Caribbean Communities and deliver on promises. NAGICO is an inspiration to us and we want to make them proud and celebrate with them at the finish.”

The team is participating in the row to raise £60K (US $80,000) for Multiple Sclerosis (MS), which affects 2.5 million people worldwide.

Ajayi-Obe’s mother Rose was diagnosed with MS while her son was still at school. “My mum has lived with MS for 18 years,” Ajayi-Obe said. “Every day is a frustrating struggle, yet she overcomes her symptoms with sheer determination and grit. She has taught me that one grows as a person by overcoming adversity. When I’m out there rowing, I will know that no matter what challenges we face,” he said.