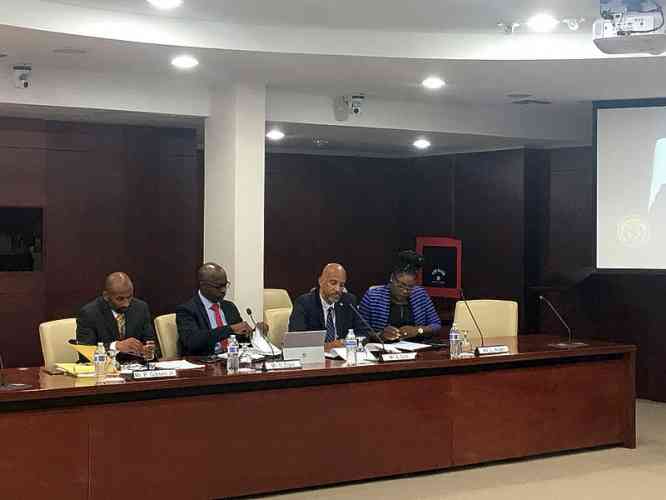 PHILIPSBURG–Government has assigned its Hurricanes Irma and Maria insurance claims for 54 buildings insured under NAGICO Insurances to a public adjustor, after a settlement agreement was already reached with the insurance company.

A settlement in principle of US $9.6 million was agreed to on June 15 for 52 of the 54 buildings for which claims were made. NAGICO has already made an advance payment of $5.5 million to government.

NAGICO Managing Director Eric Ellis told Members of Parliament (MPs) during a meeting of the Central Committee of Parliament on Tuesday that government has an insurance policy with NAGICO that covers buildings and furniture/equipment located in the insured buildings. NAGICO received claims for 54 buildings from government, but has not yet received a claim for content, although this has been requested.

A team of civil servants from the Ministries of Public Housing, Spatial Planning, Environment and Infrastructure VROMI, Education and Finance had been assigned to represent government in the claims process with NAGICO. Collectively parties agreed on the scope, quantities and depreciations, etc. that would be applied to the claims and took nine months to agree in principle on a settlement of US $9.6 million for 52 of the 54 buildings for which claims had been filed.

Ellis said the only reason a settlement was not reached for two of the buildings is that two days before the agreement, NAGICO was requested to revisit the two buildings in question because additional damage had been discovered and the insurance company was requested to revisit and reconsider its settlement for the two. He said NAGICO has since done so.
NAGICO also visited the Council of Ministers on June 21, and explained the claims process.
Ellis said NAGICO had received on September 14 a response from government to the offer it had made. In its response, government indicated that its claims will now be assigned to a public adjustor. The insurance company has since responded to government’s position.
Alluding to the advance of $5.5 million that has already been made to government and the agreement in principal made on the settlement of the claims, Ellis told MPs there is no holdup in payment. The company is now awaiting a response from government and Ellis assured that as soon as NAGICO receives a response on its offer, the remaining payment will be disbursed to government.

Update on claims
In providing a general update on NAGICO’s general claims settlement, NAGICO Chief Executive Officer (CEO) Dwayne Elgin said more than 6,000 policyholders had filed claims with the company after Irma and Maria. As of Tuesday, 153 claims were outstanding, which Elgin said represents less than three per cent of the overall claims received.
NAGICO has paid more than NAf. 550 million in Irma and Maria claims. Of the 153 claims that are outstanding, NAGICO currently holds a reserve of NAf. 87 million for what remains to be paid.

“We expect to have the majority of these claims settled in a short period of time,” he said, adding that some of the claims are subject to legal proceedings and some to arbitration.
The current case of Princess Juliana International Airport (PJIA) is one of the cases that is in arbitration. A few larger claims are also outstanding.
“In essence, we believe that in matter of months, we will conclude our claims process as far as things that are within our control,” Elgin noted.

Underinsurance
Elgin gave a rough estimate that some 20-30 per cent of Irma and Maria claimants were underinsured. He made clear that the figure is just a guess, as a statistical analysis was not done. The consequences of underinsurance for clients is that their claim will be proportionately reduced.

Elgin said NAGICO has property inspectors who go out and inspect each property that it insures, do a risk inspection and make an estimate on what the property should be insured for. He said that while insurance companies are not qualified appraisers, it does this based on reconstruction rates of which it is aware and it attempts to determine the value of the property.

If inspections are carried out, the company writes its policyholders and advises them that they may be underinsured and need to have their properties appraised.
NAGICO shared information on a number of other topics during the meeting, based on questions from MPs.