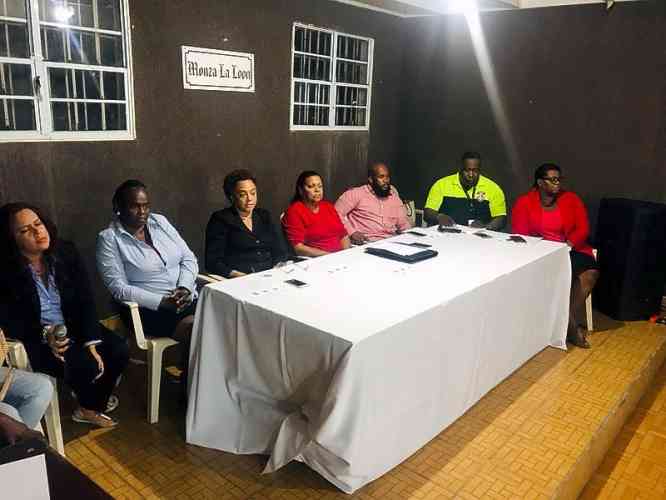 PHILIPSBURG–The three unions representing police and immigration officers will be meeting with Justice Minister Cornelius de Weever on the concerns of membership on Friday, November 16.

The November 16 meeting had been planned earlier, but after a meeting amongst police and immigration officers and the three unions on November 7, it was decided to seek an earlier meeting date with the minister.

NAPB President Rogerrel Mauricia said on Monday that an earlier date could not be set because the minister has a busy schedule this week. “Therefore, it would leave us no other choice, but to wait until November 16, for the planned meeting with the Minister of Justice,” Mauricia said.

The three unions, NAPB, ABVO St. Maarten union and Windward Islands Civil Servants Union/Private Sector Union (WICSU/PSU), urged their membership to have patience and said they look forward to meeting with De Weever to continue working to address the issues of concern to their membership.

One of the sticking points for the union is De Weever’s request for between six months to a year to finalise the signing of a package for workers. Police and immigration officers are not happy with the request as they have been waiting for many years already for this to be finalised. The minister has not indicated why he needed such a lengthy period. The package that has to be signed consists of the “rechtspositie,” function book and salary scales for workers. Depending on the outcome of the November 16, meeting, the unions will meet and determine whether action will be taken to demand that the issue be resolved post haste.

During the November 7 meeting police and immigration officers expressed frustration with the slow pace within which issues affecting them are being addressed by authorities. Immigration officers were particularly upset with what they deem to be a lack of attention for them and feel as though they are being neglected since they were placed back under the auspices of the police force. Issues such as lack of uniforms, vehicles, their function book, salary scales and “landsbesluit” (national decree) were amongst other areas within which the members of the disciplined forces expressed concerns about.