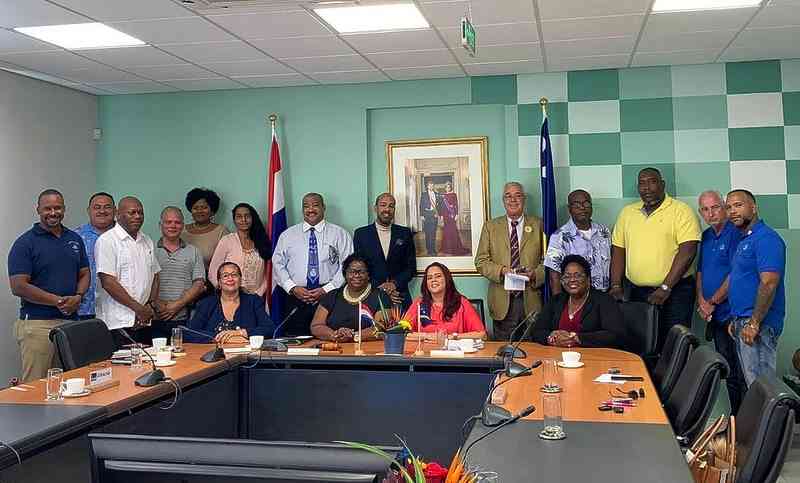 Union board representatives pose after a meeting with CGOA Curaçao.

The board members of the unions came together in Curaçao from November 19 to 21 in celebration of the milestone, NAPB said in a press release on Thursday.

The anniversary celebration opened with a gala ceremony on Tuesday, November 19. NAPB St. Maarten President Rogerrel Mauricia shared a little history about the NAPB’s start. He spoke about the island-wide strike of oil refinery workers on May 30, 1969, that led to chaos and the destruction of Willemstad, Curaçao.

“Members of the Police Force at that time did not have proper representation and therefore made the decision that a union was needed to protect their rights,” he said.

Mauricia took the opportunity to present tokens of appreciation to the boards of SPA, RCN and NAPB Curaçao. He concluded his remarks by outlining the need for the unions to be united in the fight for their members.

The celebration continued on November 20 with a seminar. “During the seminar the union boards received a very detailed explanation on the workings of the [Central Organised Consultation in Civil Service Affairs – Ed.] Centraal Georganiseerd Overleg in Ambtenarenzaken (CGOA) of Curaçao,” Mauricia said. “We all received useful information and practices that are presently not used in our unions. This was a surprise for members of the CGOA, but they expressed their willingness to assist the boards of the other unions where needed.”

Mauricia also had the pleasure to meet with Latin American Confederation of State Workers CLATE President Julio Fuentes. CLATE represents workers in 35 countries in the Caribbean and Latin America. Mauricia said the two had discussed the first steps for NAPB to become a member of CLATE.

The event concluded on the final day, November 21, with a holy Mass at Suffisant Church.

NAPB congratulated all of its distinguished members on this milestone.