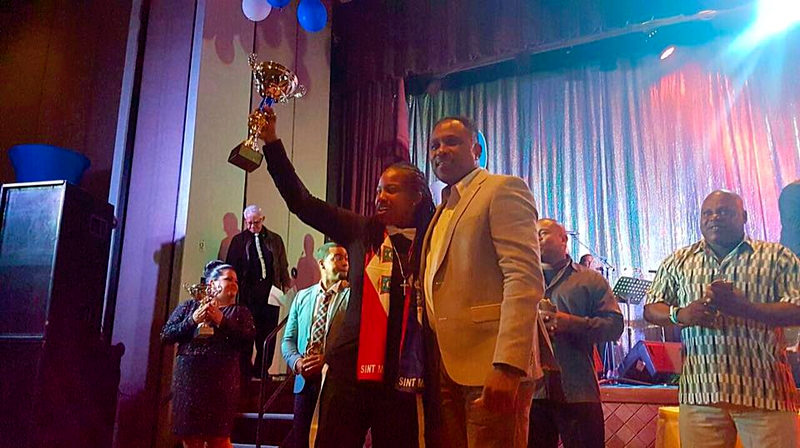 The festival culminated Police Week celebrations held on that island from August 12 to 21. Approximately 40 police and immigration officers from St. Maarten travelled to Aruba for the annual event, which also saw officers from host country Aruba, Curaçao, Bonaire, Saba, St. Eustatius, Suriname and the Netherlands attending. Officers from Bonaire left the event before it ended after one of their officers was tragically gunned down. During Police Week, Aruba also celebrated its 30th Status Aparte anniversary with a church service and a Commissioner’s Ball.

NAPB President Jeanine Peterson said the NAPB was proud of Hill’s win. Hill also won Miss Popularity and received a standing ovation after her performance. She competed against 13 other competitors from the other police force organizations represented.

Hill thanked God for blessing her with the gift that allows her to touch others and everyone who had been involved one way or another in her participation in the competition. “Your love, your support, your encouragements, your trust, your faith in me, your belief in me towards me will never be forgotten, never. Receiving those awards brought tears to my eyes and I will never let those tears be in vain. Every individual, your hospitality still has my heart in awe of your love, dedication and your support,” she said. “I am forever grateful.”

Hill joined the St. Maarten Justice Academy, when she signed up for the recruitment in 2013. She is an Immigration Officer based at the Immigration Border Protection Service Headquarters on A.Th. Illidge Road. She loves to sing. “I’m always singing even if it is just a quick chant, or a simple line from any song that just happened to be in my mind or my heart,” she had told this newspaper in an earlier interview.

She won a chance to represent St. Maarten in Aruba after winning the local leg of the competition. “When you’re born with a God-given talent, that’s something within you that He placed there and only He as the Creator Himself can replace it… I grew up singing in church. Music is my passion. My family is musically oriented and it runs within my veins, it’s in the blood. I have done a bit of performing here and there along with some “Karry-your-own-key” (laughing), which give me the platform to practice when I get the chance and work also on my stage presence,” she had said earlier.

Her future goal is to be in the music industry on a full-time scale in the future. She enjoys listening to African Music and likes artistes, such as Tiwa Savage, Iyanya, Jorede Bello, Patoranking, the group P Square and outside of Africa, she enjoys Rihanna, Beyoncé, Kanye West, O.T Genesis, *Disiigner*, Future and Charlie Puth, amongst others.