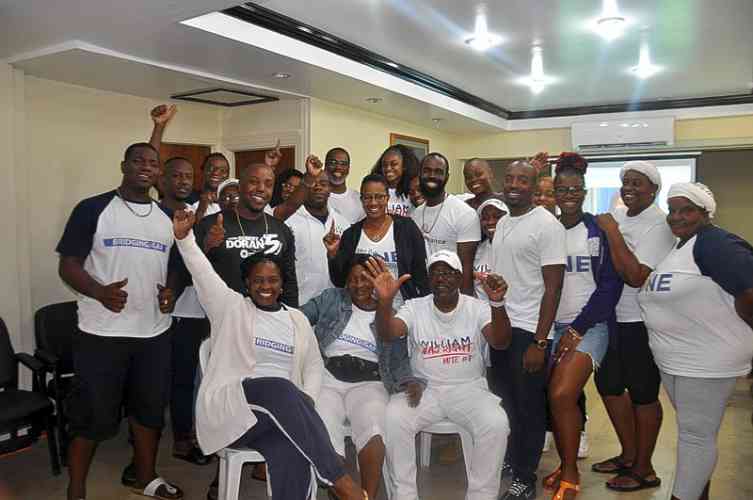 National Alliance leader Silveria Jacobs with party candidates and supporters just after the final results were announced on Friday morning.

PHILIPSBURG–National Alliance (NA) captured the most seats in the snap parliamentary election on Thursday, clearing five seats outright and earning one “residual seat” for a total of six seats in the new parliament of St. Maarten.

NA pulled 4,694 votes in Thursday’s election, 555 more than the 4,139 the party earned in the 2018 snap election. NA’s Egbert Jurendy Doran is the biggest vote-getter in the election with 843 personal votes.

The second biggest party in the election was United People’s (UP) party, which has four seats, three of which it earned outright and a fourth residual seat with 3,232 votes, 898 fewer votes than the 4,130 party earned when it contested the election in 2016. UP did not contest the 2018 election.

United St. Maarten Party (US Party) maintained its two seats, earning one outright and gaining a second residual seat, with 1,759 votes, 29 fewer votes than the 1,788 it earned in the 2018 election.

New kid on the block Party for Progress (PFP) performed at the polls with two seats, one of which it earned outright and one residual seat it was granted. PFP captured 1,408 votes in its first time at the polls.

And United Democrats (UD) captured one seat in parliament with 1,162 votes, losing 4,586 from its performance in the last election, when it was a combination of Democratic Party (DP) and UP. DP did not contest this election.

People’s Progressive Alliance (PPA) earned 326 votes, falling short of a seat by 563 votes, but gaining 46 votes compared to the 280 votes it earned in its last election in 2018.

Main Voting Bureau Chairperson Jason Rogers said the preliminary results showed that a total of 13,333 votes were cast. The quota to earn a seat was 889 votes. A total of 11 seats were earned outright and four residual seats had to be allocated.

A public session will be held in Parliament on January 14 at 10:00am, when the official results will be established. As per legislation, each eligible voter is allowed to be present and any objection that a voter would like to file can be done by voicing that objection and motivating it, if there are grounds, and the Voting Bureau will deliberate and give its decision on the objection(s).

According to the preliminary results, earning a parliamentary seat for the National Alliance will be Doran, who secured 843 votes; NA leader Silveria Jacobs, who won 753 votes and is the second highest vote-getter in the election; Christophe Emmanuel with 687 votes, the third highest vote-getter in the election; William Marlin with 390 votes; Ardwell Irion with 345 votes; and Rodolphe Samuel with 248 votes.

Grisha Marten-Heyliger, wife of former UP leader Theo Heyliger, was the biggest vote-getter for that party with 656 votes at her first time at the polls. She will be headed to Parliament along with UP leader Rolando Brison, who secured 488 votes; newcomer Omar Ottley with 418 votes; and Sidharth “Cookie” Bijlani with 290 votes.

PFP leader Melissa Gumbs will be a new face in Parliament with 559 personal votes, along with newcomer Raeyhon Peterson.

UD leader Sarah Wescot-Williams will be headed back to Parliament earning 289 votes.