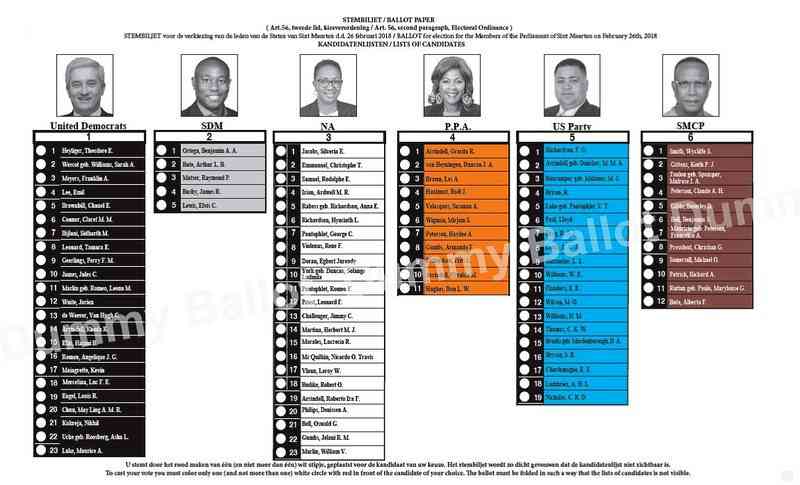 CUL DE SAC–A vote for the National Alliance (NA) in today’s snap parliamentary election will be a vote for democracy, stability, honesty, truth, integrity and a government that will deliver for the people of St. Maarten.

This was the clear message NA leader Silveria Jacobs gave to the crowd of supporters who gathered at the Scott property on L.B. Scott Road on Saturday evening to listen to the party’s 23 candidates, at its final public meeting before today’s election.

Jacobs said her vision for St. Maarten is for everyone to be a participant in the progress of the country so that “The Friendly Island” can be number one again.

“We will be number one again,” she stressed. “Many of us are still suffering and some are being abused by employers.” She said an NA government will support entrepreneurship, amongst many other things, and ensure that young people have a chance to be the best they can be.

She cautioned voters to be keen on who they will cast their ballots for, noting that persons who make up lies just to be in power cannot be trusted.

She spoke of the backlash she had received from political opponents when she fought to reopen schools less than one month after Hurricane Irma devastated St. Maarten to get children back in schools and bring back a sense of normalcy to households.

While she was being praised by every UN group that was in the country at the time, her opponents believed she was shining too brightly and were critical. She said also that fellow former Minister Christophe Emmanuel had worked hard to clean up the country in record time after the hurricane and former Finance Minister Richard Gibson had worked arduously to bring financial discipline to the country.

Jacobs said that as an educator she has fought for children and worked with parents and was encouraged to step up and enter politics to represent the entire populace of the country. “I stand for the people of St. Maarten,” she said. “Whether in or out of government I will always stand for you,” adding that she is authentic and real and is the same person who was elected in 2010, 2014 and 2016.

Those responsible for the downfall of the former hardworking NA-led government, cannot even back up their excuses why an election is being held today. She said former Prime Minister and NA leader William Marlin, is a hard-working person and a true leader who stood up for his country. She said he is a man who has done many things for St. Maarten, including ensuring that houses, schools and roads were built, amongst a long list of other things, and this is the legacy she has taken on as the new NA leader.

She urged voters to go out and cast their ballots early today. “This is serious business. They are trying to make a mockery of you and of your brain and thinking skills. By sending National Alliance in, you are sending a strong message,” she said.

Candidate Ardwell Irion urged voters to not be complacent. He said the party is asking voters for eight or more seats so that the NA can govern for an uninterrupted four years. He said the party believes in agriculture, education and raising the minimum wage and understands how to do it, reducing cost of living, understands that GEBE bills are too expensive, and is the only party that believes in working on social issues and has a proven track record of addressing this matter.

Former Prime Minister and NA #23 candidate William Marlin said February 26 will go down in history as the day the people of St. Maarten said enough is enough.

Marlin stressed that voters can put their trust in the National Alliance family, as all of the candidates who had been submitted for screening in the past had passed, including Marlin himself who passed four times and Jacobs who passed three times. He alluded to all ship-jumpers who are now gathered on the United Democrats party slate and indicated that the candidates cannot be trusted, not just because there are many ship-jumpers, but because the party has a history of candidates constantly failing screening.

“You can’t put your money on a team that moves around like a bundle of frogs jumping around. The future of St. Maarten is not to be gambled with,” he said.

He said it is the voters who will decide which party will govern the country for the next four stable years. Marlin said voters have been subjected for too long to governments that they do not want because the electorate voted for one thing and ship-jumpers gave them another thing. He said voters in all districts will come together today and vote for stability.

“Say ‘enough is enough.’ For too long we have been suffering and the suffering will stop on February 26,” he said.

He said NA’s political opponents could not fight the party one-on-one in the election, so they decided to come together, but this coming together shows that “the big red machine is nothing more than a dying machine.”

He also said this will be the last election he will be contesting and that Saturday night would be the last time he would be addressing voters as a candidate on a party slate. Marlin, who called his family up on stage during the party’s final public meeting before today’s election when he made the announcement, has served in politics for 39 years.

NA number 2 candidate Christophe Emmanuel, who was fighting back tears and eventually shed some while speaking to the crowd, told the people of St. Maarten, “I got your back.”

He alluded to the ring road land scandal and indicated that if giving land to local St. Maarteners is wrong, then he will continue to do it wrong because locals deserve to own a piece of St. Maarten. Local names are not only the Wescots, Meyers and Heyligers, but also Gumbs and the last names of those who were in attendance at the NA meeting.

“You deserve a piece of this country too. … Something is wrong if you are not allowed to prosper in your country. Send a message that St. Maarten belongs to each and every one of us,” he told voters.