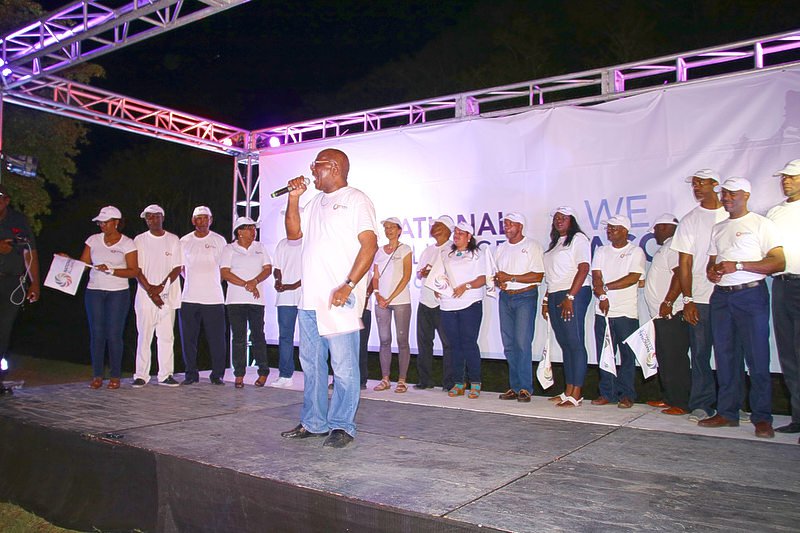 The inclusion of younger candidates shows the party’s vision for the future, according to Marlin, who presented the candidates. The party’s deputy leader Minister of Education, Culture, Youth and Sports Silveria Jacobs is number two on the list and will take over the reins of the NA soon, Marlin indicated.

Candidates had the opportunity to speak to the supporters and give them the reasons they had chosen to run with NA.

Marina spoke about continuity in government and said all hands were needed on deck to guarantee the party’s victory in the September 26 election.

Bell said he had stayed out of politics for more than 15 years and had decided to finally throw his hat in the ring and work for the people.

Jennifer Richardson wants to champion the social ills of the country and wants voters to take a chance on her come election day.

Academy PSVE teacher McQuilkin said he had seen the social problems students face on a daily basis and had decided to step up to the plate and represent the people the best way he could. He said his upbringing had him prepared for taking office if elected.

Violenus was passionate about contesting on the NA list for the first time. “I am from Sucker Garden and believe me that this Government has achieved much for such a short time. National Alliance needs four years in government and the time is now,” he said.

Challenger continued to praise the party by stating that the only party to move the country forward was without a doubt NA. “How many fingers do you have on your hand? If the answer is 10, that is what we need to give you a stable government,” he said.

Former Member of Parliament Laveist said NA had never governed for four years and it was about time the people give it the mandate. “I am a soldier this party needs in Parliament. Our leader William Marlin shouldn’t have to wake up tomorrow and worry if there will be a Government, yes or no. My track record is solid and I want the people to give me the chance to go back in there,” he said.

Young candidate Irion said he was the only candidate on the list with all his hair still on his head. He hopes not to get any grey hairs during the campaign trail and wants more involvement of young candidates in the election cycle. He is a Government financial controller.

Minister of Finance Richard Gibson spoke about his achievement of balancing the country’s 2016 budget. “We had three months to present the budget and we did it. ‘Spend only what you have’ is the attitude we adopted and I am happy to say it worked,” he said.

Deputy leader Jacobs wants the voters’ support for a full term in office. She said much had to be done and in the coming weeks the party would be unveiling its plans to move the country forward.

NA leader Marlin spoke about the party’s achievements while in office. “Work will soon start on Back Street and drivers will no longer worry about damaging their vehicles when driving on Back Street. We initiated the camera project for Philipsburg. Minister Jacobs will soon introduce a plan for solar panels for all public schools. Soon the Government will utilise the new Government Administration Building,” he announced.

He concluded by thanking the party’s board for its work and commitment to the party.