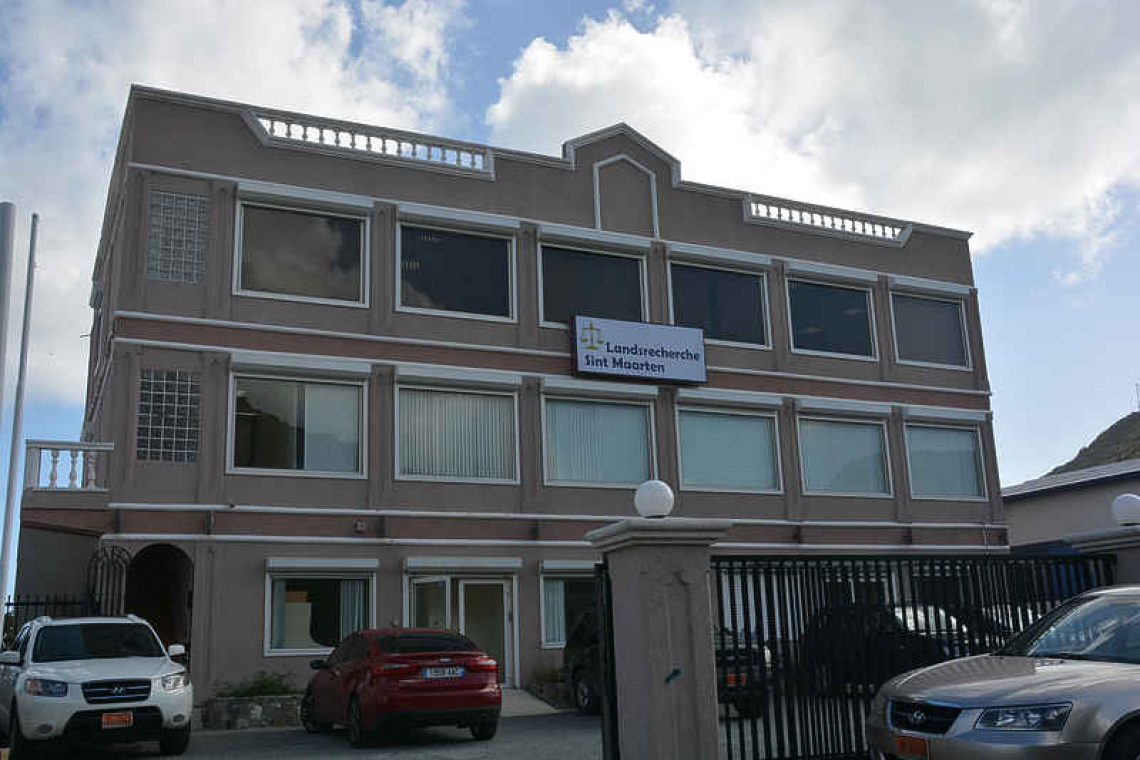 PHILIPSBURG–St. Maarten’s National Detectives (in Dutch, “Landsrecherche”) do not comply with essential financial, material and personnel preconditions to properly function, the Law Enforcement Council concluded in an inspection report about the agency, which was published on Monday.

“The Council concludes that the National Detectives is, at this time, unable to (independently) carry out its legal tasks in an optimal manner. The basic conditions for this are lacking,” said the council. “Despite plans to develop the National Detectives, there are still several serious bottlenecks 10 years after establishment.”

In the report, the council investigated the extent to which the National Detectives is equipped to execute its tasks. According to the council, the agency’s functioning is problematic in all aspects.

“Policy, management and supervision are lacking. The means of the National Detectives are inadequate to achieve its objectives, mainly due to the structural lack of budget. The independence of the agency is also insufficiently secured,” said the council.

The council said its recommendations to address the organisation’s bottlenecks and challenges were barely followed.

“Despite all of this, the staff keep doing their best for the agency, but they also deserve a (safe) working place to properly carry out their tasks,” said the council. “The various plans for the further development of the National Detectives – [such as – Ed.] the organisation plan with the accompanying implementation plan and the improvement programme [made] by the Prosecutor’s Office – have not led to the desired result, namely a fully functioning agency.”

The council said the agency’s legal framework is mostly up to date, but noted that the function books have still not been formalised.

The Minister of Justice has not formulated concrete policy about what is expected from the National Detectives, said the council, adding that the lack of policy has a negative effect on agency’s execution of tasks and collaboration with stakeholders.

“For the organisation, this mostly means that there is insufficient supervision on performance and priorities, which, ideally, should be defined as uniformly as possible by the Justice Minister, the Attorney General and the National Detectives,” said the council.

According to the council, in recent years, the Prosecutor’s Office has tried to intensify its supervision of investigations conducted by the National Detectives through the agency’s coordinating committee CCLR.

This situation is concerning to the council for several reasons. “For a number of months, deliberations by the CCLR were not regularly conducted. Furthermore, the communication between the National Detectives and the Prosecutor’s Office is not optimal, which affects ongoing investigations,” said the council.

The council found that the National Detectives has yet to gain its “desired standing” within law enforcement in conducting so-called integrity investigations.

“There should be greater investment in critical resources, such as a business process system and increasing current knowledge and capacity through education of current staff and recruitment,” said the council.

According to the council, the National Detectives is highly dependent on support and expertise from the Kingdom Detective Cooperation Team RST and the Anti-Corruption Taskforce TBO.

“While this is currently necessary because of the National Detectives’ lack of capacity and expertise, and the fact that cooperation is considered a good thing, the secondment of RST personnel should not be a long-term solution,” the council said. “The Council appreciates the attention the agency, rightfully, dedicates to the subject of integrity. This attention is reflected in, among other things, the introduction of a code of conduct for employees and the identification of their secondary activities.”

The National Detectives faces budgetary challenges, it was stated in the report. According to the Justice Ministry, the agency’s budget has remained virtually unchanged for the past several years.

“As such, the agency has not been able to make the required investments in material and human resources, such as investing in the tools necessary for operations, including its vehicle fleet, and equipment and supplies for use in and around the building.

“Furthermore, the ability to qualitatively fill vacancies appears to be essential for the growth of the organisation. For example, the position of the head of the agency is once again vacant, which has implications for the management of investigations.

“The aforementioned bottlenecks cause employees considerable frustration. In addition, employees experience difficulties due to the lack of a formalised legal status; for example, with regard to their national decrees, promotions and remuneration,” said the council.

Cooperation with local justice system partners, such as the St. Maarten Police Force KPSM and the Financial Intelligence Unit MOT, is considered good, said the council.

However, the council said there is limited cooperation between the National Detectives and some other government departments, such as Civil Registry and Tax Inspectorate.

“It has become apparent to the council that the desirability and feasibility of intensifying the cooperation between the sister agencies within the Kingdom has long been under discussion at a ministerial level. However, [this has been] without tangible results. Given the limited scale of the countries, the Council feels this is a miss.

“The Council concludes that all organisations understand the need for cooperation, but that they agree that they have nothing to offer each other as long as their own limitations remain unaddressed. In the opinion of the Council the bottlenecks which are preventing more intensive cooperation between the organisations need to be eliminated as quickly as possible,” it was stated in the report.

The council offered 17 recommendations to St. Maarten’s Minister of Justice in its report.

“The Minister is requested to, among other things, provide a regulation on the legal status of the agency, formalise the function book, provide staffing for the agency in accordance with the established staffing plan, adopt earlier recommendations issued by the Council concerning an overall political-administrative policy … [and]

“Reserve sufficient means in the budget based on the agency’s needs, and to promote cooperation between the National Detectives and sister agencies,” said the council.

The full report, entitled “Inspection: Review of St. Maarten's National Detectives Agency”, is available in English and Dutch on the Council’s website