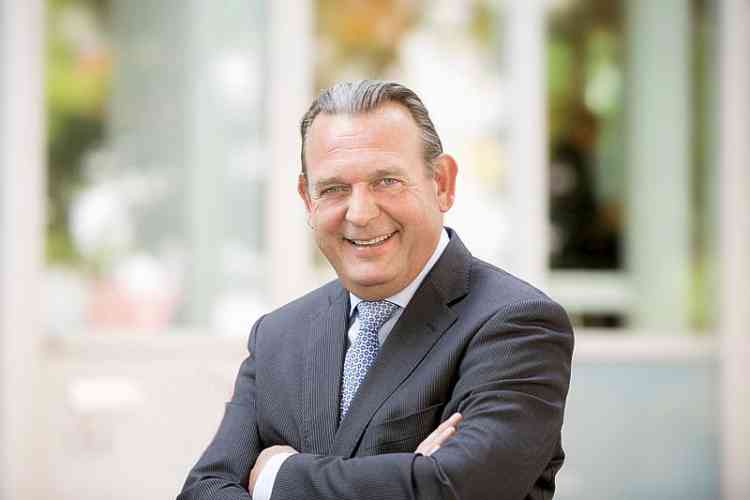 THE HAGUE–National Ombudsman Reinier van Zutphen has high expectations of Dutch Government Commissioner for St. Eustatius Mike Franco and his team, not only to restore regular government processes, but to also truly make things better for the Statia people. “I expect results, prospects for the people,” he said.

When Van Zutphen visits St. Eustatius mid-June, he expects to see improvements for the people. At least the new Government Commissioner has shown willingness to look into concerns expressed by the Ombudsman, such as the matter of the Caribbean Netherlands Pension Fund PCN and the Internet connection of Gwendoline van Putten School.
“I have called Franco to also let him know that we will be coming to the island. He understands how things work where the Ombudsman is concerned,” Van Zutphen told The Daily Herald in anticipation of the consultation hours the office of the Ombudsman will hold in St. Eustatius on Monday, March 19. Consultations will also take place in Saba Thursday and Sunday, March 22 and 25.

The Ombudsman expects a solution for the pension monies of civil servants and teachers that have disappeared since 2010. In November 2016, the Ombudsman already sounded the alarm bell, advocating that a solution was necessary. However, to this day this issue remains unsolved because the public entity has not provided the necessary information to the PCN.

“This case is still open. I expect that we will soon hear how this matter is being handled. Government has a responsibility towards these people who have paid their pension premiums for years and who are now the victims,” said Van Zutphen.
He is also looking forward to a speedy solution for the issue of low-quality Internet service and the high price of this service that has been hampering education at Gwendoline van Putten School.
A high-quality Internet connection is important for the school so it can make optimal use of educational material for its students, stated the Ombudsman who addressed this issue in November 2016.

Van Zutphen said he was also “curious” as to the execution of the reconstruction of the Windward Islands after Hurricane Irma. The Dutch Government has reserved 67 million euros for the recovery of St. Eustatius and Saba after the hurricanes, and another 550 million euros for the St. Maarten Recovery Fund. The Ombudsman said he was keen to hear how these recovery efforts were doing, what the effects will be and whether the local population has been involved in the process.

Having worked in Curaçao as a Judge at the Joint Court of Justice for five years in the past, Van Zutphen said he felt very much connected to the islands. “I know the islands well and I love the people. I want to contribute to making things truly better for the people. There is still a lot to do where that is concerned.”
Government has to take good care of its citizens. As the Ombudsman for the Caribbean Netherlands, Van Zutphen hears the complaints and concerns citizens have about their government, not only about the island governments, but sometimes also the Dutch Government.

Whereas there are some cases of concern in Bonaire and St. Eustatius that require the Ombudsman’s intervention, things are relatively good in Saba – only a few minor issues about noise nuisance, social housing and the way the rules are being handled by authorities.

“In Saba it mostly concerns the regular Ombudsman work. There are no big issues there. The Saba Government is handling matters in a proper manner. Civil rights are addressed properly. You can see that good governance has an immediate positive effect. Saba is doing well. There is room for improvement in St. Eustatius,” said Van Zutphen.
Asked about the intervention by the Dutch Government in St. Eustatius, Van Zutphen said that as the National Ombudsman he was not involved on a political level. “But I do look at the interest of the citizens. What does this mean for the people?”

Tangible results
According to Van Zutphen, the intervention by the Dutch Government has to yield tangible results for the citizens of St. Eustatius. “People should feel that things are going better. I will keep an eye on the perspective of citizens. As Ombudsman I can do nothing about politics, but I can pose questions on how matters are addressed. I have a role to play in ensuring good governance, open communication and transparency.”
Van Zutphen said it was important that government operates according to the law. That also goes for the Dutch Government Commissioner in St. Eustatius and his team. “It was not easy to work with the Executive Council in the past two years. I am curious to find out how things will be working out now,” Van Zutphen said.

Citizens must be able to trust their government. “Governments have to take care of that aspect, but as the Ombudsman I can give advice, contribute. It must be clear that the government is there for its citizens, and not the other way around where the system is more important than its people,” he said.

“It shouldn’t matter who or which party is in government. Citizens have to be able to count on basic services like solid education and good health care. People have to get clear answers to the letters that they write and the permits that they request. Citizens judge their government based on actions. These aspects are important in the building of trust.”
The Ombudsman has a strong view on establishing a so-called social minimum for Bonaire, St. Eustatius and Saba because it is an important tool in combating poverty. The ingredients for poverty are clear: people generally earn less on the islands while the cost of living is very high.

“It is not my authority to draft laws, because that is up to the legislator. But I do see the results of poverty and I find that a bottom line should be set. People have to be able to properly sustain themselves, to have a decent life without poverty,” said Van Zutphen.

St. Maarten recovery
Although the Ombudsman mainly works for Bonaire, St. Eustatius and Saba, Van Zutphen said he would be available in case citizens in St. Maarten have complaints or concerns during the rebuilding of their island with Dutch funds.
He noted that Dutch civil servants will be working in St. Maarten during the recovery. The Dutch Police and Marechaussee are already working on the island, as are a small contingent of Dutch Defence personnel and members of the Coast Guard.
“I can imagine that people in St. Maarten will come to me if there are problems with Dutch civil servants,” said Van Zutphen, adding that he always remained in close contact with St. Maarten Ombudsman Nilda Arduin in matters concerning the island.
Van Zutphen mentioned that the National Ombudsman had become involved when a group of people from St. Maarten who were evacuated after Hurricane Irma had trouble registering at certain municipalities in the Netherlands.

“I have a specific task for the Caribbean Netherlands, but I work closely with the Ombudsmen of Curaçao and St. Maarten. Unfortunately, Aruba does not have an Ombudsman as yet. The appointment of an Ombudsman in Aruba is long overdue,” he said.
The Ombudsmen of Curaçao, St. Maarten and the Netherlands meet once a year to strengthen their cooperation and to discuss matters on a Kingdom level. Van Zutphen also participates in the Caribbean Ombudsman Association CAROA.

“These gatherings are important because they give us an opportunity to learn from each other, to support one another, to exchange information and to receive training. It is important that we support each other where our independent position is concerned. Together we are strong and we are better able to improve things for our citizens,” he said.