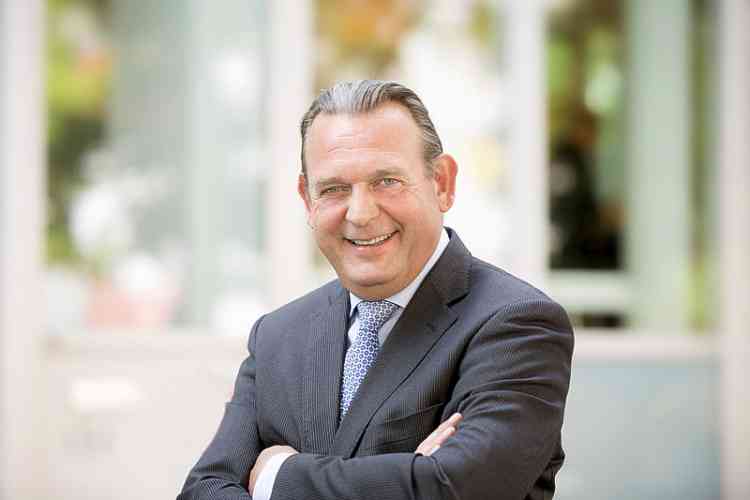 THE HAGUE–Showing his support and having the best interest of the people of the Windward Islands at heart, Dutch National Ombudsman Reinier van Zutphen will be visiting St. Maarten, St. Eustatius and Saba starting this Sunday.

Van Zutphen, who visits the islands regularly because as National Ombudsman he is responsible for the Caribbean Netherlands, will first go to St. Eustatius where he will spend all of Monday, June 11, and Tuesday morning, June 12.
“I am very interested to see and hear how things have been going since Hurricanes Irma and Maria, and how the reconstruction is progressing. Are people satisfied with the process of reconstruction? Are there problems with securing assistance from the Netherlands?” Van Zutphen said in an interview with The Daily Herald.
For the Ombudsman it is also important to see for himself how St. Eustatius is coming along after the intervention by the Dutch government in February. He wants to know whether there are complaints and how these are being handled. “Are things better now or is there still a lot to do? And are the concerns of the people being included in the process?”
Van Zutphen will have a meeting with Dutch Government Commissioner Mike Franco to discuss the developments. Van Zutphen said that as Ombudsman he found it important to hear whether attention is being given to the formal complaints that people file, but he also wanted to know whether people feel safe and confident enough to voice their concerns in a formal or informal way.
Asked his thoughts about the criticism of the financial supervision which has failed in St. Eustatius in the past years and the findings of the Committee of Wise Men, which partly blamed the Dutch government for the situation in Statia’s government, Van Zutphen said he has been in contact with State Secretary of Home Affairs and Kingdom Relations Raymond Knops regarding this matter.
“I hear and notice that there is a willingness on the part of the Dutch government to improve the situation in St. Eustatius. But these efforts have to result in concrete improvements for the people on the island, because they are who really count. Are the measures helping to make things better for the people?” he asked.
He will visit Gwendoline van Putten School for secondary education to see how the complaint his office received regarding the slow Internet connection which hampers the students in their lessons and studies is being tackled by the local authorities.
While in St. Eustatius, Van Zutphen will seek an update on the handling of another formal complaint, which regards the missing information the Caribbean Netherlands Pension Fund PCN needs for the pension allocation of Statia government employees. The lacking information has affected multiple government employees and teachers.
Van Zutphen wants to know whether progress has been made in locating the missing information in the administration of the local government. “I was promised that this would be taken care of. I want to hear how much has been recovered, what is still lacking and when this matter will be resolved.”
The Ombudsman will be in Saba on Tuesday afternoon, June 12, and Wednesday, June 13. There are not many issues in Saba that require his urgent attention, apart from a few complaints about excessive noise. He will have a meeting with Island Governor Jonathan Johnson to discuss the handling of these complaints, and he will visit the persons who filed a complaint to hear how things are going.
“Mostly I am there to talk with people, to take a look for myself and to listen,” said Van Zutphen, emphasising that he would not be having official consultation hours in Saba and St. Eustatius this time. A team from the National Ombudsman will visit the two islands in a few months to hold consultation hours.
Asked whether domestic violence and children’s rights had his attention, Van Zutphen said this was certainly the case, and that on this dossier there was close cooperation with the Children’s Ombudsman Margrite Kalverboer. “We are one team,” he said, adding that this has always been a theme and that the issue would certainly return to the agenda of the Ombudsman and the Children’s Ombudsman.
Domestic violence, poverty and the infringing of children’s rights often go hand in hand. In the case of domestic violence, there is often a task for the police. Securing sufficient safety for families, eradicating poverty and defending children’s rights are important aspects, as are how the police handle cases of domestic violence and related issues, and how people can file a complaint if things are not going the right way.
Van Zutphen will close off his visit to the Windward Islands in St. Maarten on Thursday, June 14, and Friday, June 15. He will meet with St. Maarten Ombudsman Nilda Arduin to discuss current developments, the island’s reconstruction and the agenda of the Kingdom Consultation for Ombudsmen in the Dutch Kingdom late 2018. Van Zutphen said hopefully an Ombudsman will be appointed in Aruba before the end of the year.
Even though the Dutch National Ombudsman formally has no task in the autonomous country St. Maarten, Van Zutphen explained that a relatively large number of Dutch civil servants were working in St. Maarten, including police officers, prison personnel and members of the Royal Marechaussee.
Together with his colleague Arduin, he wants to see how the Dutch assistance is working out and what the process is in case of a complaint. Van Zutphen will also meet with St. Maarten Parliament Chairperson Sarah Wescot-Williams, Prime Minister Leona Romeo-Marlin and Head of the Dutch Representation in Philipsburg VNP Chris Johnson.
Van Zutphen will attend the Governor’s Symposium on Friday morning before his return to the Netherlands on Friday afternoon. Even though the focus is on the formal talks, he said he would not forget about the people and the general developments in St. Maarten since Hurricane Irma. “I am also curious to know how people are doing,” said Van Zutphen, who in the past has worked in the Dutch Caribbean as a Judge.