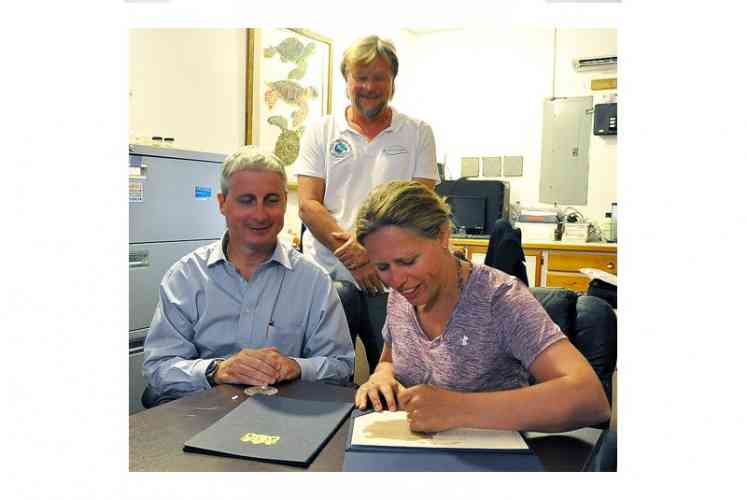 Schouten said in a short address that she was very happy to comply with the request of the public entity Saba to grant national park status to Mount Scenery Nature Park.

“I am pleased to present you with a certificate confirming Mount Scenery Nature Park as a national park of the Caribbean Netherlands,” she said.

Mount Scenery Nature Park will also be included in the list of national parks in the new Nature Policy Plan the minister will have ready at the end of this year. The Ministry of Agriculture, Nature and Food Quality LNV will be looking at the financial component together with the public entity Saba and SCF.

Schouten also submitted the request for national park status to the Specially Protected Areas and Wildlife (SPAW) Protocol, which is part of the Convention for the Protection and Development of the Marine Environment of the Wider Caribbean Region, also known as the Cartagena Convention.

She announced that Mount Scenery Nature Park would be put on the list of protected areas of regional importance. She explained that acquiring national park status involved a procedure whereby a number of requirements and standards have to be met.

Established by Island Ordinance in September 2018, the terrestrial nature park covers some 25 per cent of Saba and measures about 350 hectares. It consists of dry tropical forest, tropical rainforest and cloud forest with a wide variety of orchids and ferns. The park includes the most pristine areas and is regarded as the most bio-diverse part of the island.

Commissioner Rolando Wilson, who has Environmental Affairs in his portfolio, said he was very content with the granting of national park status. “This is an important step to get to an effectively managed national park. The Mount Scenery Nature Park Management Plan has already been drafted and is ready to be implemented,” he said.

Schouten shared the good news of her decision to grant national park status to Mount Scenery Nature Park at the end of a presentation by SCF Executive Director Kai Wulf and Saba Bank Manager Ayumi Kuramae.

Wulf and Kuramae spoke about SCF’s work, protection of Saba Bank and Saba Marine Park, and the many challenges the organisation faces in terms of climate change, threats to the coral reefs, invasive species, roaming goats, scarce financial resources and too little human capacity.

The national park status will hopefully serve as a boost to the good work SCF has been doing, said Schouten. “It is a recognition of your work and it will help to protect your valuable nature. I can see that you do your work with a lot of passion for nature and we are grateful for that,” she said.

Schouten was highly positive about Saba’s nature and in particular Mount Scenery, which she climbed on Tuesday morning. “It was terrific, and I was struck by the way nature changes along the trail.” She said it was important to protect this pristine nature, while at the same time keeping it accessible for people to enjoy and discover.

She said she was also impressed by the underwater nature. She specifically mentioned Saba Bank, the largest submarine atoll in the Atlantic Ocean, with some of the richest biodiversity of marine life in the Caribbean, with a total surface area of approximately 2,200 square kilometres.

“Many people don’t realise how big the Saba Bank is. There is a lot of attention for the coral reefs in The Hague. The coral reefs have our support,” said Schouten, who assured that the coral reefs in the Caribbean Netherlands would have a prominent place in the Nature Policy Plan, and that there would be a bottom-up approach with input of the local stakeholders.

In general, Schouten was very positive about her first-time visit to Saba. “It was a good visit. I was impressed by the hard work that is being done on the island with few means: the solar park, the water pipe project, the harbour project, the long-term thinking and planning, but also the protection of nature with relatively few people.”