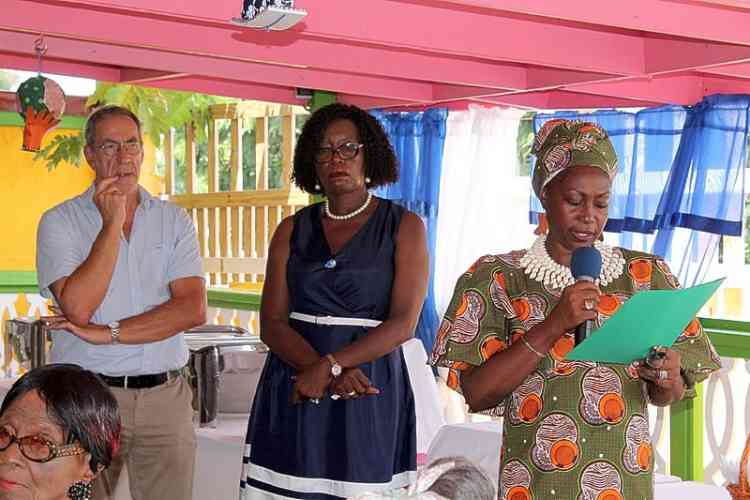 Residents of Bethany Home look on at the opening ceremony. (Photo Robert Luckock)

MARIGOT–The opening ceremony for National Week of Retired and Elderly persons, known as “La Semaine Bleu,” took place at the Bethany Home in Marigot on Monday morning. The annual event – extended this year – is observed during the month of October with organised activities almost on a daily basis.

Opening remarks were given by the Director of Bethany Home Jean-Marie Marchais, Third Vice-President in charge of the Department of Solidarity and Families Annick Pétrus, Territorial Councillor and President of the home’s administration board, Annette Philips, and Frédérique de Saint Alary who is in charge of managing budgets at Agence Regional de Santé (ARS).

This year’s theme is “for a society that respects the planet.”

Philips noted hurricane repairs to the Bethany Home are an “absolute priority” and will be starting shortly. The first meeting on the launch of renovation work is this Wednesday, October 10. She thanked employees of the home for working under difficult circumstances.

Vice-President Pétrus reminded that La Semaine Bleu was cancelled last year because of the hurricane but a tour for the elderly was still organised on November 5, 2017. In addition, 375 Christmas baskets were distributed.

The Department of Solidarity and Families helped 1,400 families after Irma and much aid was distributed. She emphasized how badly needed a new senior citizens home is and reassured the Collectivité is working hard on accelerating the file.

She noted a recent census on the French side revealed 3,900 persons are aged over 60. In concluding she thanked all the partners that have made La Semaine Bleu possible.

This year’s senior citizen featured on the promotional material for La Semaine Bleu is Amélie Miller who was accompanied at the opening ceremony by her grand-niece Sidonie Miller. The 90-year-old Amélie hails from Colombier and has one son and two grand-daughters. Her secret to a long life is to “be contented and take care of yourself.” A recap of her life was given by Bethany Home’s recreation director Nicole Richardson.

Today’s activity is an information day in the Galis Bay car park from 9:00am to 4:00pm and includes a workshop on well-being given by the Caisse Général de Securité Sociale (CGSS). On Wednesday Bethany Home residents will enjoy a breakfast at the Mercure Hotel, Baie Nettle, at 8:30am.

On Thursday, October 11, a workshop will be given by Association La Couronne on Environment and Managing Energy from 4:00pm to 6:00pm in the former Evelyna Halley School, Marigot. Association Saint-Martin Santé will be giving a Yoga workshop for the elderly in the Galis Bay car park at 9:00am on Saturday, October 13. The same association will give a Qi Qong workshop on Wednesday, October 17.

Saturday, October 20, sees the elderly given a tour of the island by bus starting from the Galis Bay car park at 9:00am. Association Saint-Martin Santé will also be conducting physical activity/sports classes in Colombier on Wednesday, October 24, at 9:30am.

The closing ceremony for La Semaine Bleu is on Saturday, October 27, in the Bethany Home at 9:00am. Breakfast will be offered by the Nature Valley Association of Colombier and there will be music and entertainment.