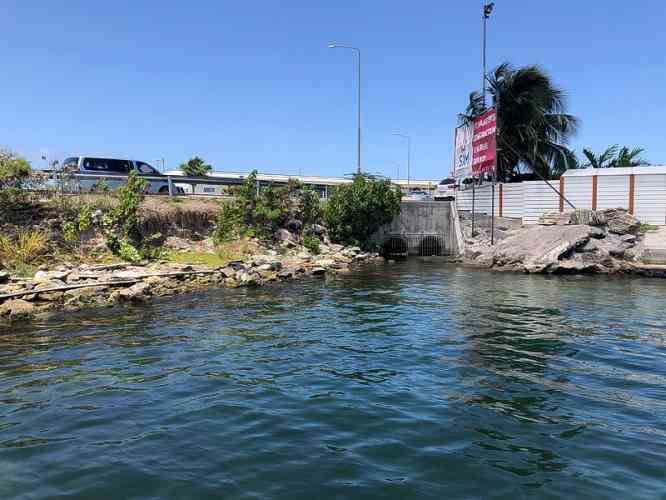 The area of Simpson Bay Lagoon in which raw sewage was entering the environment.

COLE BAY–Nature Foundation has issued a call to government to mandate its companies and large private sector developments such as hotels to execute environmental impact assessments and to hire environmental health and safety officers.

This call comes after the environmental monitoring group responded to two incidents recently of wastewater entering the marine environment and wetlands. The foundation measured the presence of sewage in the area of Simpson Bay Beach known as Kim Sha and a major sewage leak originating from a pipe next to the Anguilla Ferry Terminal opposite Princess Juliana International Airport. The first complaint was filed by an island visitor.

A “very disturbing video” of raw sewage entering Simpson Bay Lagoon from a pipe next to the Anguilla Ferry Terminal alerted the foundation to that environmental issue. On investigating the location, bits of toilet paper and raw sewage were found to be entering the lagoon from a pipe opposite the airport.

“A water sample was taken and, not surprisingly, the sample came back positive for sewage indictors,” said Nature Foundation Manager Tadzio Bervoets in a press statement.

Reports on both incidents are now in the possession of the Ministry of Environment and Infrastructure VROMI.

These recent incidents and a previous one are the basis for the foundation’s suggestions to government to mandate mandatory environmental impact assessments to be conducted by a third party specialised in such matters for new projects and projects centred around rebuilding after Hurricane Irma.

“We are also suggesting that large developments such as resorts and government-owned companies have environmental health and safety officers on staff to be better able to manage the environmental impacts. This is common practice globally, save for St. Maarten,” said Bervoets.