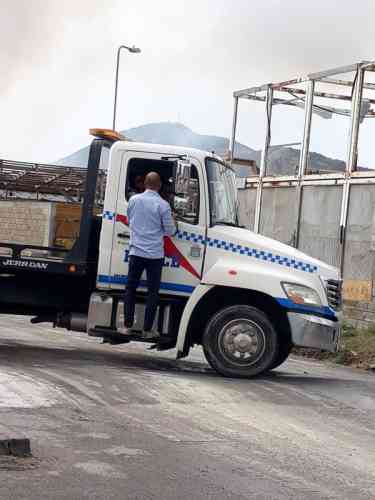 POND ISLAND–St. Maarten Nature Foundation has distributed almost 300 facemasks on Monday to residents affected by the fire which has been raging at the Irma Landfill. Facemasks were especially distributed to the elderly, those with medical issues and those in difficult financial situations.

Facemasks were also distributed to law-enforcement personnel controlling the checkpoints at the landfill fires for further distribution.

“Again, we are faced with a situation where the community is brought in danger by this significant fire and the smoke caused by it. As we still wait for action to occur regarding the management of our solid-waste issues we encourage that especially expectant mothers and those with a weakened immune system to wear facemasks to reduce the risk caused by the landfill,” Nature Foundation said.

The Foundation also urged that restoration funds be used towards the management of solid waste.

“Only through public, open and transparent funding with all the necessary checks and balances can we adequately address this issue. We have communicated this to the World Bank and to Government for inclusion in the restoration fund” commented Nature Foundation Manager Tadzio Bervoets.

Of particular concern is arsenic, lead, cadmium and copper because of the human-health effects. Lead, arsenic and copper can be quite toxic to humans and have been shown to cause some forms of cancer.

These same chemicals are released into the atmosphere through either smoke or through falling fine ash and therefore pose a significant health risk to the community, the Nature Foundation stated.

During a survey conducted by the Nature Foundation it was shown that all districts of St. Maarten have been affected by smoke caused by landfill fires.

The survey revealed that 35 per cent of those surveyed frequently experience negative effects throughout the year from fumes coming from the landfill.

Fifty per cent of respondents complained about troubled breathing due to the fumes coming from the landfill; 73 per cent mentioned burning in their eyes, nose or throat and 50 per cent experienced burning, watering eyes because of the toxic fumes.

“The Foundation has continuously communicated the results, findings, recommendations and suggestions to decision-makers and it is the hope of the Nature Foundation that a solution to this serious health issue is arrived at urgently. In the meantime, we suggest wearing these masks,” said Bervoets.

Those in need of facemasks can contact the Nature Foundation through their Facebook page or by calling tel. 544-4267.