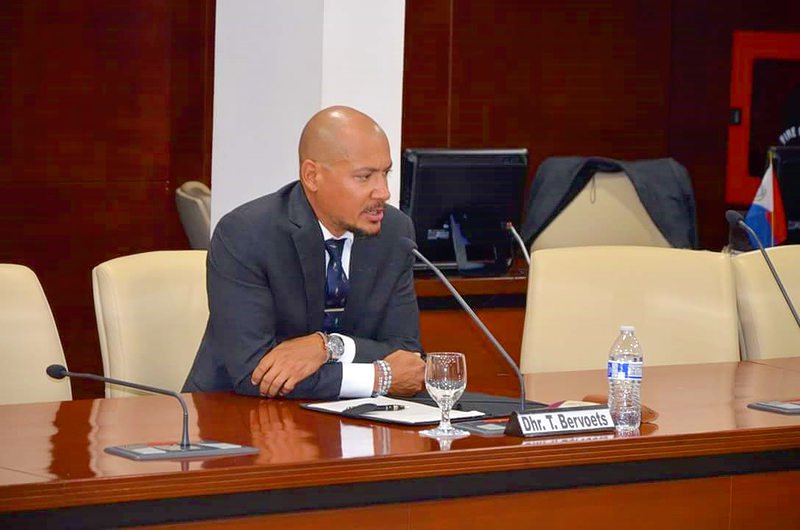 PHILIPSBURG–St. Maarten Nature Foundation Manager Tadzio Bervoets updated Members of Parliament (MPs) on the present state and the cleaning of Simpson Bay Lagoon, Oyster Pond and other waters, during an urgent sitting of the Central Committee of Parliament on Friday.

“The salvage activities in the Simpson Bay Lagoon and those to be undertaken have been very much in the news following the dreadful realisation of the huge number of boats that sank in the lagoon and other waters of St. Maarten,” Chairperson of Parliament Sarah Wescot-Williams stated in a press release prior to the meeting.
“It is envisaged that this will create an environmental disaster of unequalled proportions and the Nature Foundation has sounded the alarm. Even to the casual observer, it is evident that the underwater spillages and leakages due to the damage these boats have incurred could cause irreparable damage to an already stressed Lagoon,” said Wescot.
Bervoets echoed these concerns during his presentation to Parliament. While showing pictures of fuel streaming from wrecks near Port de Plaisance and Isle de Sol, Bervoets informed Parliament that some 300 vessels sank at Simpson Bay Lagoon and in Oyster Pond combined.
“These vary from five-metre powerboats to a 300-foot mega yacht that sank near Port de Plaisance,” he said in estimating it would take two to three years before all wrecks will be lifted out of St. Maarten waters.
According to Bervoets, some 150,000 gallons of fuel, oil, wastewater and sewage has been leaking and is still leaking into the Lagoon.
Mullet Pond was also impacted, even though it is forbidden to moor boats there. Despite the prohibition several boats sank in the Pond including a houseboat “with everything in it.”
Salvaging all these wrecks will be a difficult, hazardous and time-consuming enterprise, whereas salvaging uninsured vessels of boat owners who left the island will be even more complicated to take care of, Bervoets cautioned.
He said that a piece of land that was filled in towards the western size of the Causeway bridge has been designated as a temporary depot of salvaged vessels from the Lagoon before these will be taken to the landfill for further processing. Vessels in Oyster Pond will be shipped off island.
Bervoets said that steel vessels may be sunken off to be used as dive sites and for coral breeding. Most vessels, however, are made of fibreglass and cannot be used for such purposes as fibreglass is highly flammable and a health hazard. Fibreglass vessels need to be taken out of the water and disposed of properly, Bervoets warned.
He said the Foundation met with the Maritime Department and marina owners. “Some delays with paperwork have been ironed out. Salvaging is now occurring albeit at a slow pace, monitored by Nature Foundation to see to it that wastewater and fuel is not leaking into the Lagoon.”
Stating that a hurricane of Irma’s magnitude was not a one-time event with severe impact on St. Maarten’s infrastructure, the environmentalist cautioned that we can expect such intense storms more frequently.
Nature Foundation made assessments of the state of nature and completed an assessment on the island’s beaches on Thursday to make sure that these are clear and safe for public use. He stated that Great Bay Beach is safe for swimmers from Pasanggrahan Hotel until Captain Hodge Pier. The section from the Pier until Walter Plantz Square is not yet cleared. However, all swimmers are urged to wear water shoes to prevent injury, especially after inclement weather accompanied by surges and swells.
Bervoets said nature on the island was hugely impacted by hurricanes Irma and Maria, calling the enormous amount of debris, which caused an exponential growth at the landfill, a “real issue” and a “significant challenge.”
He said that some historical trees, among which were tamarinds, were blown over and lost. Most foliage, however, is built to withstand hurricanes, “and we see those coming back.”
That does not go for mangroves, 80 per cent of which were already destroyed through development. “Eighty per cent of the 20 per cent that remained is damaged,” Bervoets stated.
Ten hectares of seagrass, which form an important feeding ground for sea turtles and play a role in coastal protection, were also damaged.
Brown pelicans, the national birds of St. Maarten, were also impacted by the storms. According to Bervoets, the number of breeding pairs declined from 60 prior to the storms to some 15 to 20 pairs now.