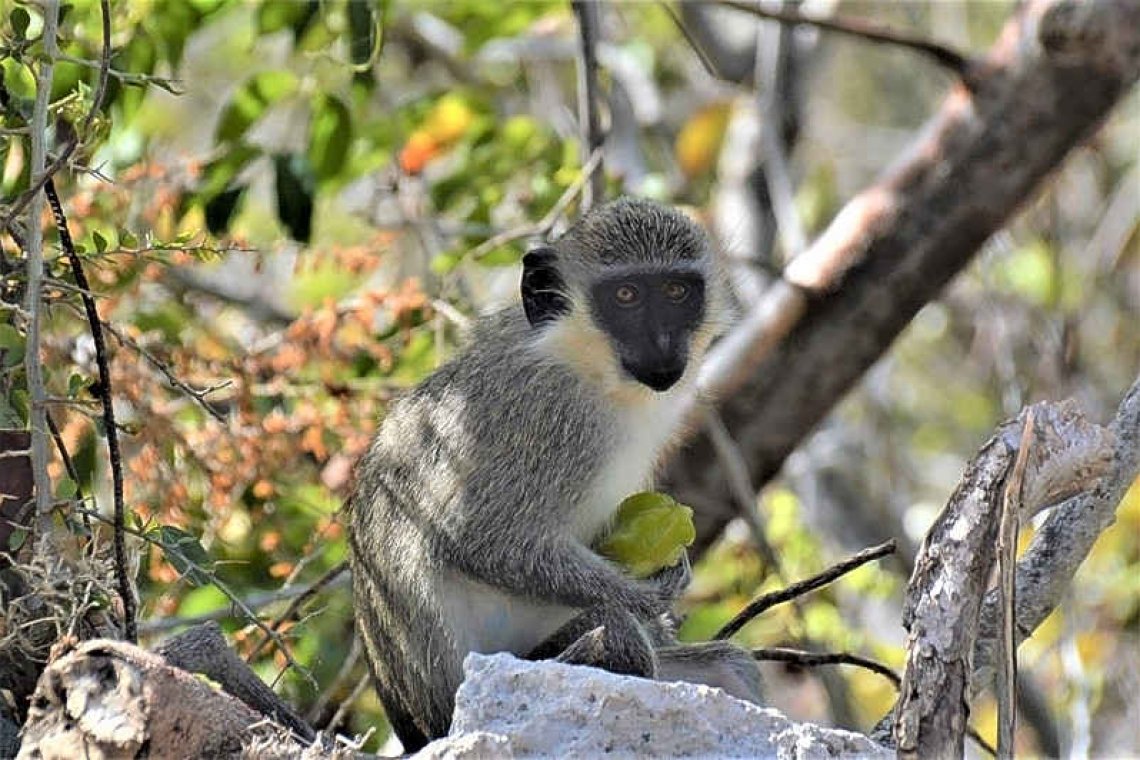 Under the lead of animal behaviourist Alice Manley, a recent graduate of Anglia Ruskin University in England, the foundation will research the current monkey population and develop a management plan for the species. It will then try to secure funding for the management plan.

The foundation will soon be conducting field surveys to understand the species’ movement and abundance in St. Maarten. It has also placed a survey on its Facebook page – which is still active – that questions residents about monkeys they have seen on or near their properties.

So far, the Facebook survey has garnered 53 responses, with 40 respondents saying they have spotted the monkeys near their homes, said the foundation. The results demonstrate that most monkeys are found in the east of the country, with sightings in Pointe Blanche, Guana Bay and Dawn Beach. However, some have also been seen in Pelican, Indigo Bay, South Reward, St. Peters and Almond Grove.

About 75 per cent of the respondents engaged in home growing, said the foundation, adding that about 65 per cent have had their crops disturbed by the monkeys.

To prevent monkeys from getting into one’s garden, the Nature Foundation advises persons to drape a thin cloth or mosquito netting over crops, pick fruit and vegetables as soon as possible, or spray water from a water pistol or hose to chase monkeys away.

As the monkeys are naturally afraid of snakes, the foundation recommends leaving realistic rubber snakes in one’s garden. “Make sure you are often moving the snakes to different areas and not leaving them in one place for too long, as the monkeys are smart and will realise they are not real and ignore them.”

Other solutions include growing crops that the monkeys do not like on one’s property perimeter, such as chili peppers and ginger, or installing an animal-safe electric fence to produce small non-fatal shocks to the animals. “Remember to be safe when using the electric fence and to keep children away from it,” said the foundation.

Vervet monkeys are classified as “least concern” on the International Union for Conservation of Nature (IUCN) Red List of Threatened Species. According to IUCN, this means the species is unlikely to become extinct in the near future.

According to the Nature Foundation, the species is very adaptable and often found in urban areas of Africa, the Caribbean and some countries in South America. Vervet monkeys are native to Africa.

While it is unknown when vervet monkeys were introduced to St. Maarten, some believe they were brought as early as the 17th century during the initial phases of European colonisation.

According to the Nature Foundation, some monkeys escaped the St. Maarten Zoo following both Hurricane Luis in 1995 and Hurricane Irma in 2017. Others are thought to have been looted or released from captivity after Hurricane Irma.

If persons have seen monkeys on or near their properties, they are requested to e-mail the Nature Foundation atinfo@naturefoundationsxm.org.

“Please provide as many details as possible, including how many monkeys you normally see, where your property is, and how often you see the monkeys,” said the foundation.