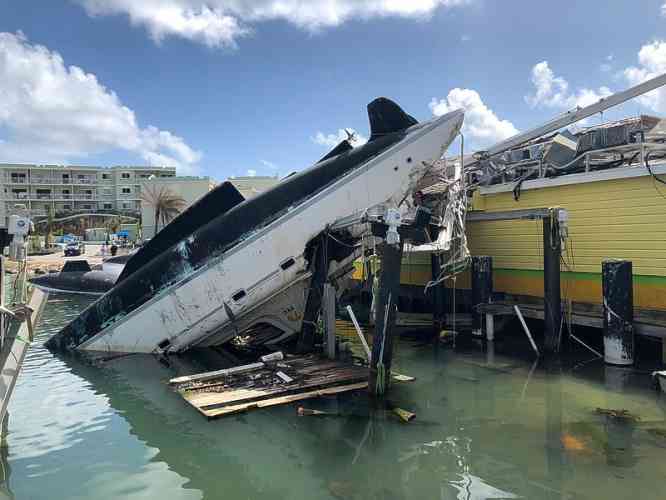 SIMPSON BAY–The removal of Hurricane Irma-damaged vessels from Simpson Bay Lagoon and Oyster Bay is ongoing, but the resulting “wreck graveyard” on Simpson Bay has Nature Foundation very concerned with the next Atlantic Hurricane Season less than four months away.

“We are asking for an urgent solution to this situation,” said Nature Foundation Manager Tadzio Bervoets. Salvage operators have pulled up some 400 vessels that sank or were badly damaged during the passages of Hurricanes Irma and Maria in September 2017.
The Foundation continues to supervise salvage operations in the Lagoon and Oyster Pond and has been cooperating and working with Government, salvagers and marina owners on the systematic removal of wrecked ships from the Lagoon.

“After the unfortunate developments right after the hurricanes which caused the salvage of vessels to be stalled, things are now running more smoothly. The unfortunate part is that due to some of the vessels being underwater for such a long time some vessels which would have been able to be recovered are now a complete write-off,” said Bervoets.
The Foundation is also working with Port de Plaisance Marina and St. Maarten Marine Management to coordinate clean-up activities in some sections of the Lagoon.

“The support of all stakeholders is key in addressing the issues that we continue to face with regard to both the environmental and economic recovery of Simpson Bay Lagoon,” said Bervoets.