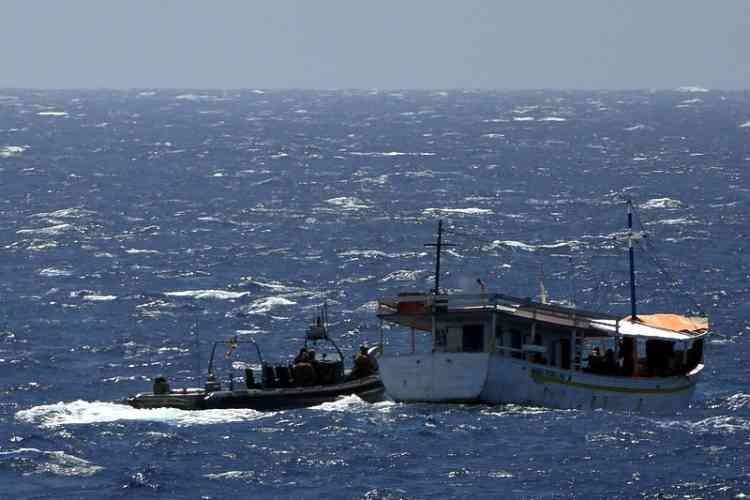 The rapid intervention FRISC vessel of HMS Groningen quickly intercepted the boat with 390 kilogrammes cocaine on board. (Dutch Defence photo)

THE HAGUE–The Dutch Navy ship HMS Groningen seized 390 kilogrammes of cocaine near Bonaire on August 26. The interception of the drugs was announced on Monday.

The successful bust was done in close cooperation with the United States Coast Guard. The drugs and the crew of the vessel that the drugs were on have been transferred to US authorities for further handling and prosecution. According to the Ministry of Defence, the confiscation was only announced on Monday due to the legal wrap-up of this case.

HMS Groningen has been actively patrolling in the Caribbean since April this year in the fight against drug smuggling. The ship is also available for humanitarian assistance and it is deployed for various Coast Guard tasks in the Caribbean such as combating illegal fishing, environmental offences and for search and rescue operations.

In order to carry out these tasks, the ship is equipped with a NH90 helicopter and two rapid intervention FRISC vessels. The Royal Netherlands Navy started a pilot in April 2019 whereby the HMS Groningen will remain in the Caribbean for two years and the entire crew is changed.

During a modest ceremony on Monday, the crew was changed and the command transferred to the new commander. The previous crew made six successful narcotic busts, seizing almost 3,500 kilogrammes of illegal drugs. The same crew also carried out five rescue actions, saving 57 persons at sea. These operations were carried out together with the Dutch Caribbean Coast Guard and the Joint Interagency Taskforce South.