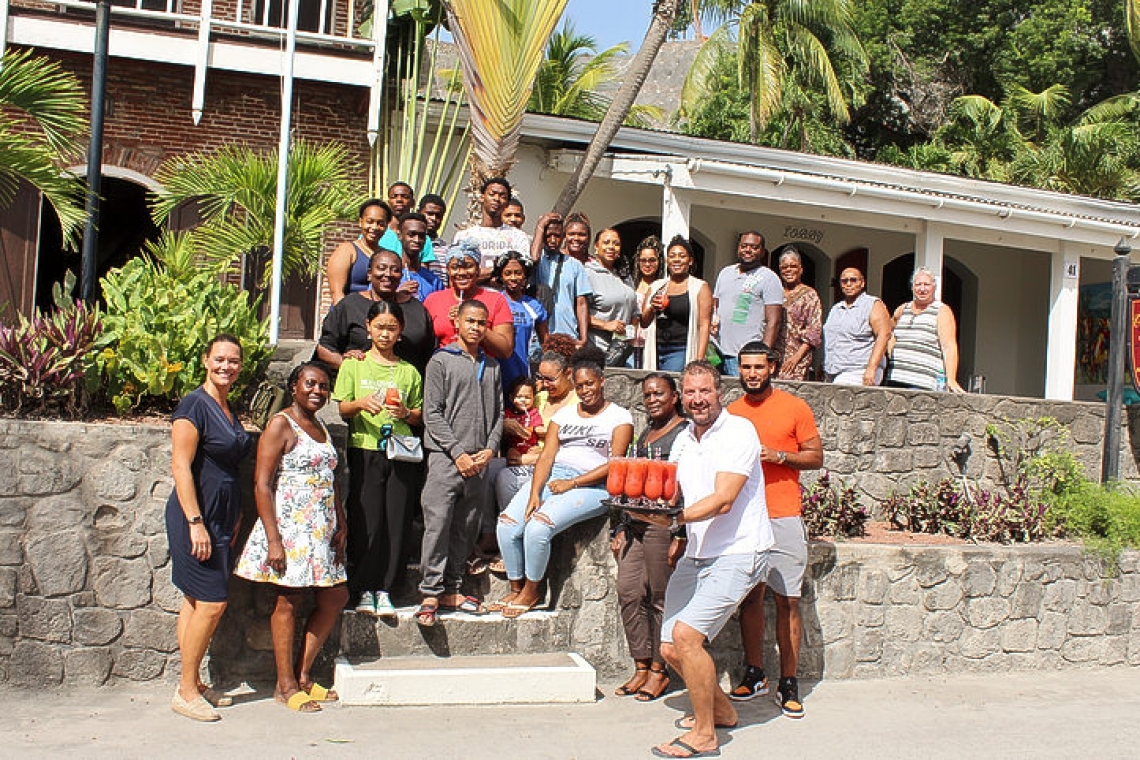 ST. EUSTATIUS–New Challenges Foundation (NCF) students had to postpone several of their fundraising events as well as an educational trip due to the coronavirus pandemic. The students held several fundraisers in 2019 and 2020 to raise funds for an educational trip. From Friday to Sunday, July 3-5, the group went for a staycation at The Old Gin House hotel and restaurant.

The public entity St. Eustatius had reached out to different stakeholders on the island for them to start offering staycations to residents of Statia. NFC director Francine Foe said she had read about the staycation offer from The Old Gin House, and together with the hotel’s co-manager Sybolt ten Hoopen they made plans for 18 NCF students and four teachers to staycation the weekend at the hotel.As the NCF group was the first to take a staycation at the hotel, Deputy Government Commissioner Alida Francis and hotel management were on hand to officially welcome them.Ten Hoopen said The Old Gin House had not had any guests since the middle of March, so they were “very happy” to have such a big group stay at their establishment.

A gala dinner was organised for the NCF group on Saturday evening. Francis said she was “excited and happy” that the NCF group was making use of the opportunity to staycation or “Statia-cation” as The Old Gin House phrased it.“It is not just about having fun in the hotel, but it is getting the opportunity to be treated like a tourist on your own island. Most of you have travelled to other places and you know what it is like to be a tourist,” Francis said.The Old Gin House was the first hotel to respond to locals’ need for a stay away from home. Francis said she plans to take part in a staycation in the upcoming week at The Old Gin House, as well as embark on staycations at other establishments in Statia.

She hopes that others will follow suit.“I hope this weekend you all will see our island through different eyes, through the eyes of visitors that have come to see and appreciate Statia,” Francis said.The NCF group said they had a wonderful time. They said their staycation was even more enjoyable than last year’s trip, as it made them feel at home away from home.