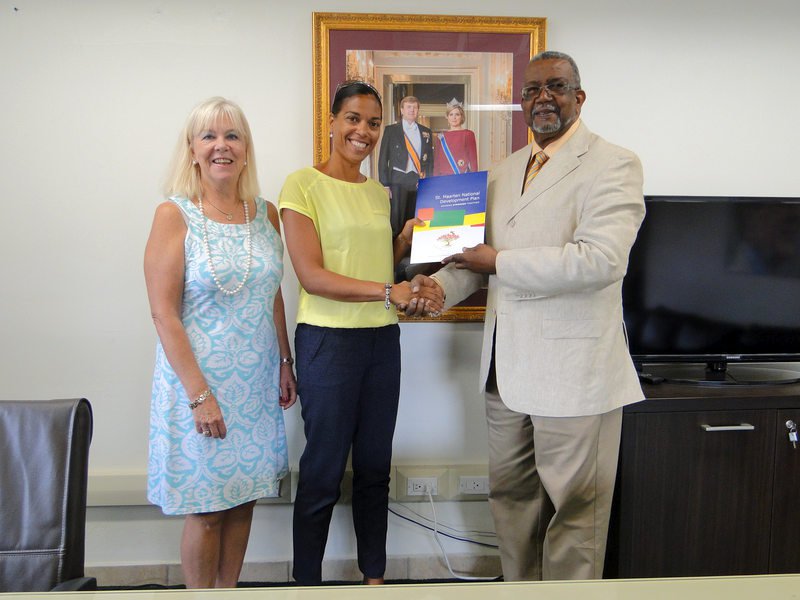 Andrea Ortega and another representative present the project to Kirindongo.

PHILIPSBURG–Senior Project Manager of the Department of the Interior and Kingdom Relations Andrea Ortega on Friday, May 20, presented Justice Minister Edson Kirindongo with a copy of the project entitled “Building a Nation: St Maarten National Development Plan (NDP) and Institutional Strengthening.”

The presentation, made during a meeting at the Justice Ministry, is in preparation of the upcoming high-level national retreat in August 2016.

“A National Development Plan is important to set the direction for the strategic long-term development as a country,” Police spokesperson Chief Inspector Ricardo Henson said in a police press release on Sunday. “It creates an implementation strategy that supports the kind of development St. Maarten needs and which the citizens want.”

The NDP will cover a period of some 20 years with short-, medium- and long-term strategies by which the public can hold the government accountable. The NDP is intended to represent a new way of development-planning for St. Maarten. It will involve ministries working within the context of development themes together with other stakeholders while implementing their mandates.

The goal of the meeting was to inform, prepare and get the commitment of the Secretary General and Minister of Justice to participate in the national retreat, Henson said.