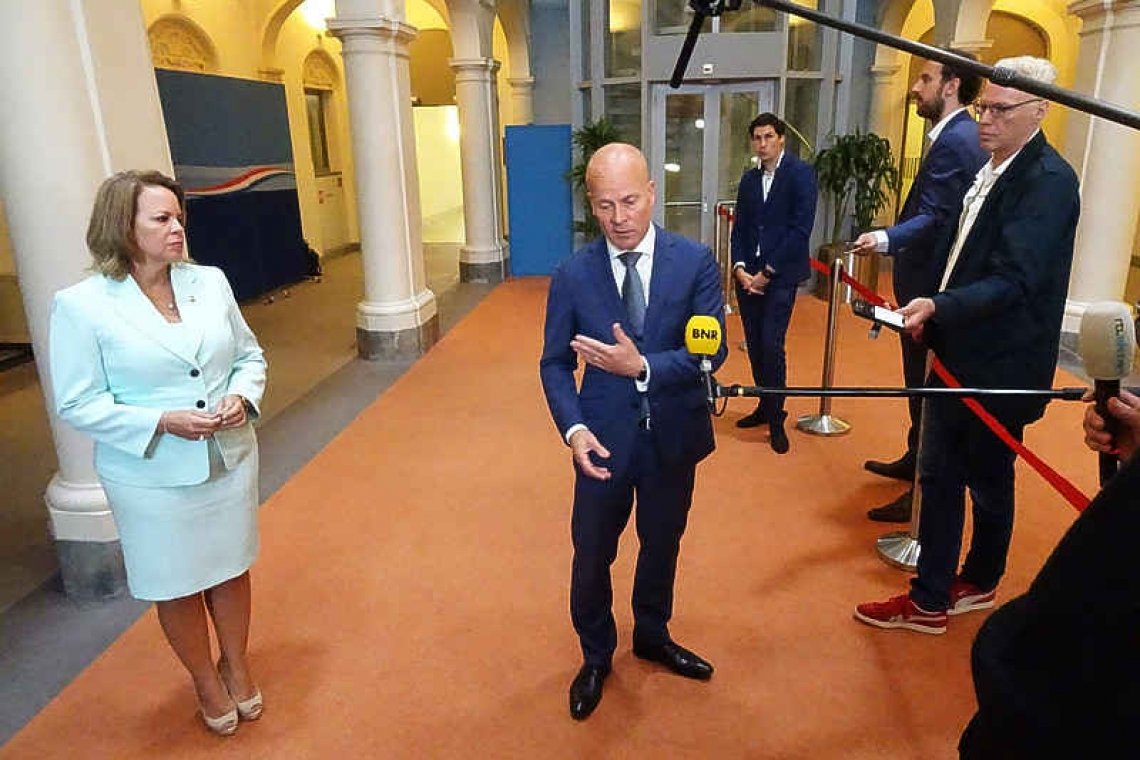 Aruba Prime Minister Evelyn Wever-Croes (left) and Dutch State Secretary of Home Affairs and Kingdom Relations Raymond Knops after the July 10 Kingdom Council of Ministers meeting in The Hague. (Suzanne Koelega file photo)ORANJESTAD/THE HAGUE–The Aruba government is still in negotiations with The Hague about the conditions that are tied to the release of the third tranche of liquidity support.Aruba complied with all conditions set at first by the Dutch government, but in the days before the July 10 Kingdom Council of Ministers, The Hague set additional conditions, which the Aruba government did not accept. As a result, the financing under the third tranche, which Aruba needs to pay the wage subsidy for the month of July, has not been released.In the negotiations with the Netherlands, Aruba has brought forward several points that were discussed in talks with local social partners, with Parliament and political parties, stated Prime Minister Evelyn Wever-Croes in a press release last Friday.The points include the raising of the pension age to 67 years, the selling of shares of government-owned companies without the consent of the Aruba government, the dollarization of the Aruba economy, the stricter financial supervision without an end date, the power and authority of the proposed Caribbean Reform Entity and the maximum salaries at government entities.“We are in negotiations with the Netherlands based on the consultations,” said Wever-Croes, who noted that the negotiations were taking place in an open and respectful manner. “We don’t have a consensus as yet on the contents. I will relay more information as soon I have this. I cannot be more transparent than I am right now. During talks such as these, you cannot just run to publish everything, because it will hurt the negotiations,” said Wever-Croes.The prime minister noted that the Aruba government so far has been able to pay the coronavirus crisis assistance to unemployed persons, the wage subsidy, the salaries of civil servants and financial assistance for small and medium-sized enterprises.Wever-Croes explained that government found itself obligated to continue cutting cost and to postpone payments in order to create space for the negotiations with the Netherlands, which have been taking longer than anticipated. “The deliberations are still ongoing. We are not where we want to be, but we are on the right track.”Meanwhile Finance Minister Xiomara Maduro told the media that even though there was no agreement as yet with The Hague, the local government had made sure to reserve funds to be able to pay out the wage subsidy for the month of July.To assist small and medium-sized enterprises with one to 50 employees during the coronavirus pandemic, the Aruba government offers quarterly financial assistance of 4,000 Aruban florins. This quarterly contribution serves to help businesses cover some of their fixed operating cost.The Aruba government has reserved Afl. 40 million in its 2020 budget for financial assistance to small and medium-sized enterprises. In the month of May, 2,515 entrepreneurs were assisted to the tune of Afl. 10 million. This financial assistance is possible due to the drastic reduction in expenditures in the 2020 budget, mainly with the support of public sector employees, who have taken a 12.6 per cent salary cut.In May, the Aruba government paid wage subsidy to 1,658 companies so they could pay the salaries of their combined 26,067 employees. The total amount involved was Afl. 45 million. In June, 1,621 companies received wage subsidy in the amount of Afl. 40 million to pay the salaries of 22,125 employees.Minister Maduro stated that in order to make sure that no fraud is being committed with these funds, audits are being carried out by the Central Accountants’ Service CAD, with additional control by the General Audit Chamber of Aruba ARA. The Aruba Committee for Financial Supervision CAFT has charged a local company to carry out the process control. This ensures that the wage subsidy process is completely transparent and accountable.