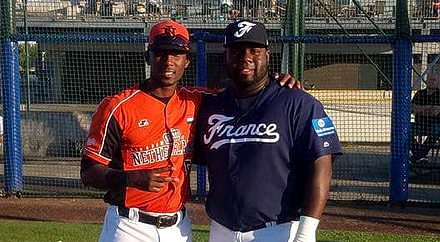 Both squads field at least one player from the Friendly Island.
France defeated Croatia 16-1. Local professional baseball player Rene Leveret had a banner day. The third baseman had three at bats. He hit a double and two singles and was walked once. He drove in two runs and scored four.
Felix Brown also from the Friendly Island posted four runs on the scoreboard for France.  The short stop went one for one driving in a run, drew three walks, was hit by pitch and stole two bases.
France is in Pool B along with Belgium, Greece Spain Italy and Croatia.  France plays Italy today.
Netherlands is in Pool A with Czech Republic, Germany, Russia, Sweden and Great Britain. Netherlands defeated Great Britain Friday, 11-1. On the Dutch team from St. Maarten is Dudley
Netherlands plays Germany today.