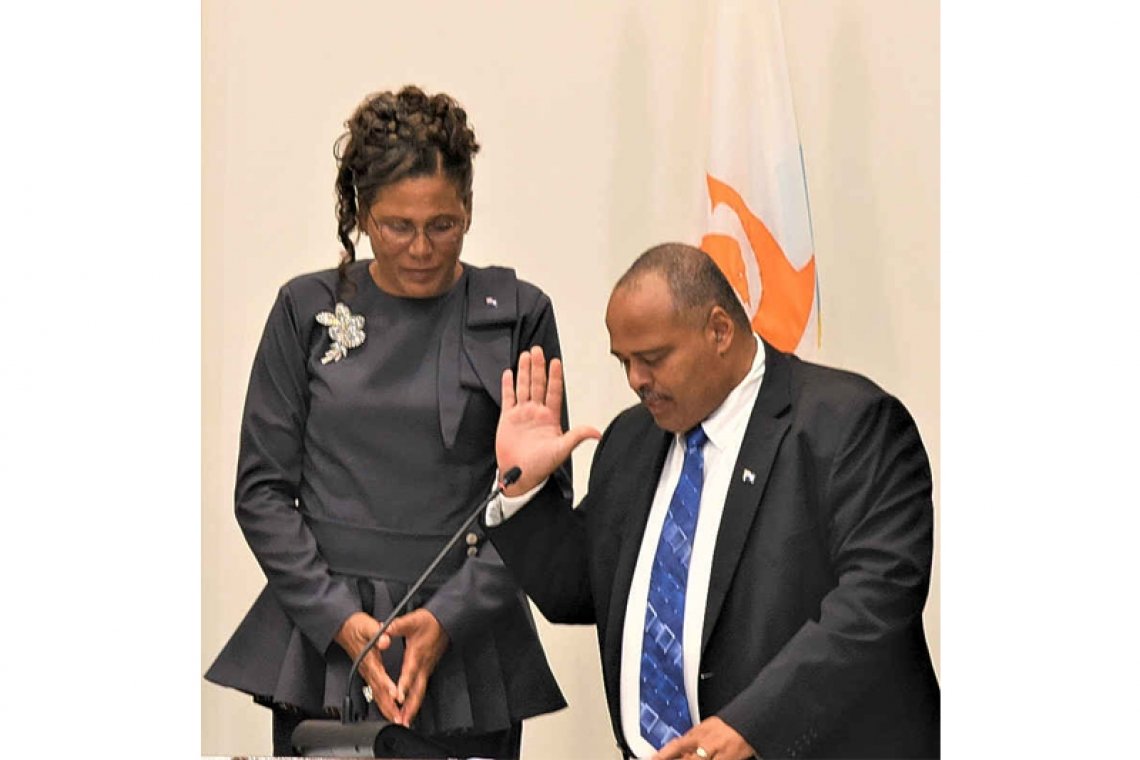 ANGUILLA–The twelfth Anguilla House of Assembly convened for the first time on Friday, July 17, in the newly renovated Atlin Harrigan Parliamentary Building. Members of the recently elected government led by Premier Ellis Lorenzo Webster, and members of the opposition met to elect the Speaker and Deputy Speaker of the House and swear their oath of allegiance. The gallery was filled to capacity with family and friends, with many more witnessing the event via media streaming.Following the Anguilla National Song by the Albena Lake Hodge Comprehensive School Choir, Minister Evans McNiel Rogers, as the longest serving continuous member of the chamber, presided over the administration of the Speaker of the House nomination and selection process.

Group of elected members including the speaker, deputy governor and attorney general.Barbara Joan Webster-Bourne, nominated by the premier, received seven votes to three votes received by Terry Harrigan, nominated by Leader of the Opposition Cora Richardson-Hodge. After accepting the position of Speaker of the House and taking the oath of allegiance, Bourne said, “It is a great honour to be nominated and elected speaker. I am grateful to all who reposed resounding trust in me to make this possible. I congratulate all members on their election, both members of the government side and the opposition side. The promotion of good governance requires a parliament that can effectively perform the three cardinal functions: namely representation, oversight regarding the executive and law-making.” She asked for the full cooperation of all members there to work for the people who elected them.Deputy Governor Perin A. Bradley was nominated to the position of deputy speaker by the premier, who said Bradley met the current qualification criteria for the position under the Anguilla Constitution. Bradley said, “I want to acknowledge the anomaly that this position presents. It is unusual for the deputy governor to serve in the office of deputy speaker. There is a quirk in our constitution that we are working to address and as soon as that matter is fixed, I intend to vacate this office immediately.”Following the election of the speaker and deputy speaker, all members of the House individually took their Oath of Allegiance: Premier Webster, Kenneth Hodge, Dee-Ann Kentish Rogers, Kyle Hodge, Haydn Hughes, Quincia Gumbs-Marie and Merrick Richardson for the government; and Richardson-Hodge; Rogers, Cardigan Connor, Jose Vanterpool, Deputy Governor Bradley and Attorney General Dwight Horsford for the opposition.All members were allotted time to make remarks, which included their gratitude to family and supporters, as well as their individual pledges to do the governance work that they were elected to carry out.The premier said he was proud of his heritage and spoke of his dynamic team and the need for change. He stressed the need for accessible and adequate health care, noting that Anguilla could not rely on other countries for assistance. He spoke of the importance of developing the fishing and agriculture industries and of youth development and asked for the cooperation of a dedicated public service.Leader of the Opposition Richardson-Hodge congratulated the speaker and the government. She said development of the labour laws needed to be continued and there was still much work to be done in constitutional reform. She thanked the UK government for its support for re-building schools and medical facilities after Hurricane Irma and other recent grants in relation to COVID-19. She said members of the opposition would always support the government in any bills that were for the advancement of the people.