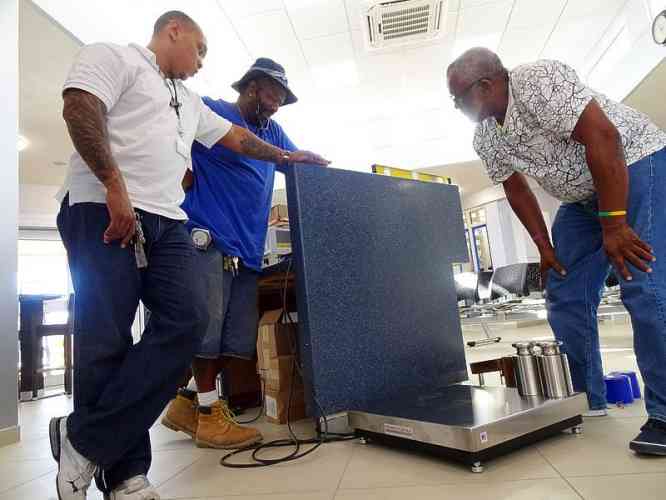 SABA–A new baggage scale was placed at Saba’s Juancho Yrausquin Airport on Friday afternoon. The scale at the check-in counter was inspected by calibration specialist and Economic Affairs Department head Dave Levenstone and was found to be in good working order. After its installation and inspection, the new scale was immediately put into service.

The old baggage scale was about five years old and was owned by Windward Islands Airways International Winair. The new scale was purchased by the public entity Saba.

Airport Manager Maegan Hassell explained that it is customary for the airport to provide a scale. As such, it was decided to buy the new scale.

Having an accurate scale is important to airlines which need it for purposes of weight and balance. The new scale is a welcome addition, said Hassell and Brian Johnson of the airport handling company Johnson Travel Services NV.

The scale is an important instrument to keep the operational limits of departing aircraft in check, explained Johnson.

“We have to make sure that the maximum weight for take-off is not exceeded. Also, on Saba we sometimes have a weight restriction because of winds. It is really important to know the take-off weight,” he said.

The other weight factors are the weight of the fuel and the weight of passengers, which is internationally set at an average of 179 pounds or 88 kilogrammes per person.

The new scale will be used for all airlines coming to Saba: Winair, SXM Airways and Windward Express.

The new, low-maintenance scale is of the same type as the old one and was manufactured by Pennsylvania Scale Company. It is widely used in airports around the world.

Levenstone inspected the new scale by placing variable weights on all parts of it and checking the two digital displays, one for the agent and the other for the passenger. He found the scale to be accurate and placed a sticker of approval on the side. The scale will be inspected regularly to make sure it continues to weigh accurately.