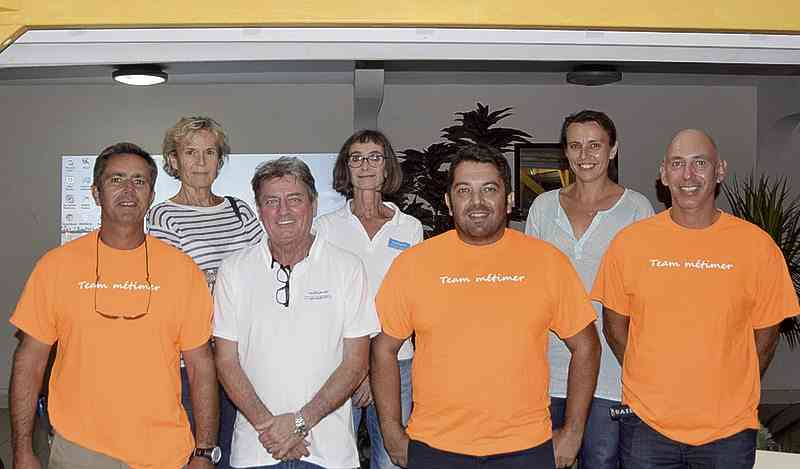 MARIGOT–French-side marine trades association Métimer elected new members to the board at its recent General Assembly held in the Cent’R Hotel, Marigot.

The meeting had a busy agenda with several subjects discussed. The 2016 balance sheet was first presented by Métimer’s chartered accountant Bruno Lise and approved by the meeting. The 2017 balance sheet is in process and the forecasts are as good as 2016, bearing in mind the operating grant paid by the Collectivité did not materialize in 2017.

However, the association’s cash position was not affected. The Association has always managed its cash flow well and has no problems thanks to good management and control, the accountant indicated.

The President’s report was then read out and distributed in hard copy. There were several interventions by stakeholders.

Brigitte Delaître gave a report on the Turquoise Magazine. The 2018 could not be published due to the circumstances following the hurricanes of September 2017. However, the 2019 edition is in production with limited resources.

The website and social media network was presented by Laurence Vallette. She noted the website has been in existence for 10 years and is regularly updated. The number of visitors to the site increases by 30 per cent each year. The Facebook page has 630 subscribers. The 2017 Fête de la Mer video posted on the site had more than 20,000 views.

A nautical club project was presented by Emmanuel Demanez. Thanks to meetings with water sports federations during the Paris Boat Show, Métimer has developed the project to create a nautical club in St. Martin, where each discipline will be a representation of its federation, thus creating St. Martin leagues.

During the boat show, an auction of photographs of the 30 sailors of the last Vendée Globe, sponsored by Senator Michel Magras raised 8,000 euros for Metimer. This money will be used for the creation of this nautical club. A committee has been set up to work on the project. The Collectivité’s Youth and Sports Department showed great interest and an appointment with the President will be made very soon.

On 2018 events, Métimer coordinator Alexina Paya noted the annual Sea Discovery Day will take place on Friday, March 25, 2018. After the huge success of the eighth edition of Fête de la Mer, the ninth will take place on the last weekend of May. As of next week, preparations will be launched.

“After Irma, the Federation of Nautical Industries (FIN) gave immediate support and decided to invite us for free to the Paris Boat Show,” Paya said. “This trip was a great experience for the team, and the FIN president agreed to offer us a stand for the 2018 edition. This will be an opportunity to show the rebirth of Saint-Martin.”

It was noted since March 2016, the law firm ALVI has been responsible for an audit on boating and yachting in St. Martin which has never been done before. There is no information about the seafaring professions, their status, importance, turnover, membership, personnel, past and future.

After Irma, this audit was put on hold. The lack of such a report was obvious. The FIN, State, Inter-ministerial Préfet, need figures to assess the situation and report on the problems the nautical industry is facing.

Metimer had to take the initiative and produce a document entitled “Presentation of Boating” which was distributed. The aim is to make it more comprehensive as it is the only database Métimer has on boating in St. Martin.

The last subject was boat wrecks in the Lagoon. For many years, Métimer worked hard to have the 20 or so wrecks washed up in our waters removed. And now there are about 500 more wrecks after Irma. An agreement has been reached between the Collectivité and Verde SXM to temporarily use a piece of land, located between the Marina Port la Royale and the Tourist Office which will be organised to remove the boats from the lagoon, depollute them, cut them into pieces and take them to the landfill.

Boats have been salvaged and left to dry by a private company, paid for by the insurance companies. Verde SXM transports the wreck remains to the eco-landfill and subcontracts with STLM, a Guadeloupean company, for the crushing of boats on their site.

Currently, only 12 boats have been destroyed. Few boats were insured correctly. Many shipwrecks are resold to buyers looking for good deals, but this creates more of a garbage fleet in the waters of St. Martin. For others, European aid is expected to pay for their destruction, but the deadline is currently unknown.

Finally, the modified Articles of the Association were presented and voted unanimously by the assembly.