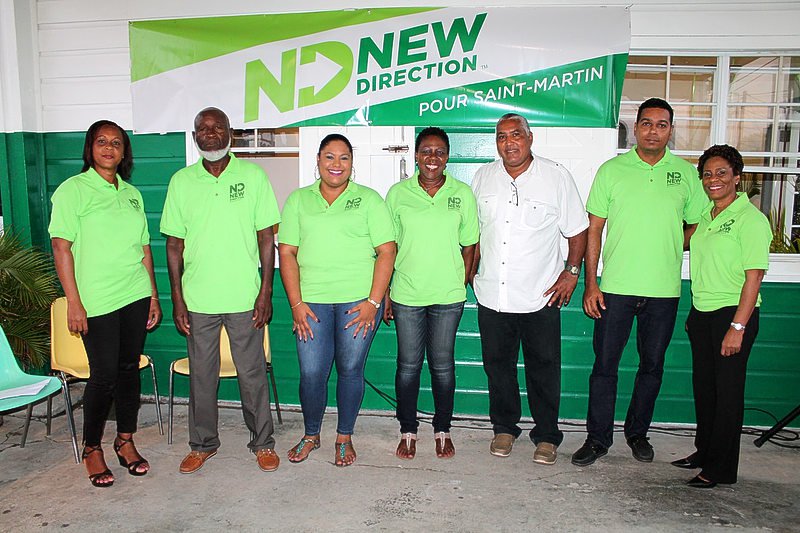 MARIGOT–The New Direction party, one of the eight parties contesting the March 19 and 26, 2017, Territorial Elections, inaugurated its campaign headquarters in Sandy Ground on Saturday evening, establishing it also as a meeting point for the party’s supporters.

The party’s list of 26 candidates was not revealed on this occasion but will be presented before the registration deadline, head of the list Jeanne-Rogers Vanterpool explained.

The evening began with a prayer, some interventions by supporters, and a speech by Vanterpool Rogers before the ribbon cutting.

She described the headquarters as a symbol, a way for new leadership, and to demonstrate and prove how concerned her party is about the future of the territory.

“Today, more than ever, St. Martin is sinking and deteriorating. Part of the policy makers of the past 10 years have been unable to show us direction or give prospects. Today in Sandy Ground, French Quarter, or in Concordia, where are the nurseries for our children? Where are we in terms of reducing school drop outs, reducing the rate of unemployment, and dealing effectively with juvenile delinquency?

“With New Direction we say stop, it’s enough. It’s more than 30 years that the same people are occupying the highest political office in St. Martin. They have nothing to offer you, nothing for St. Martin and nothing for your children. They have no vision, no projects but being in power is everything. They are only looking after themselves, their friends and families and at the same time serve the common interests of St. Martin and St. Martiners.

“With New Direction we are going to take things in hand, take the future of St. Martin in hand, not by default but from the ballot box on the evening of March 26.

“With me Jeanne Rogers-Vanterpool, my running mates, and you the supporters, we are determined to give you a new direction for St. Martin. This new direction is one of solidarity, honesty and righteousness.

“Let’s remember our history, let us remember our identity. Remember St. Martin was a meeting of several peoples. It was formed by successive waves of displacement of population and immigration. The St. Martin I know is all this and it is her strength. It is also everything that we should be proud of.

“With New Direction we offer a real alternative to the status quo, to inaction. We offer a new course, new desire, and new hope for each St. Martiner. We offer you a whole new political landscape for the next five years.

“In a few days from now we are going to make a decisive choice for our Collectivité, for our youth, for ourselves. Don’t let others decide for you. Step up and pass this message. Don’t let others who don’t wish to change anything decide for you. It is time to act now because what we don’t want is voters abstaining and above all we must be wary of careerist and calculating politicians.”