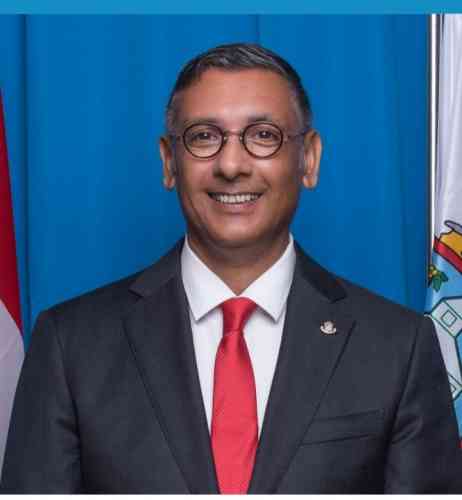 Geerlings’ comments came as he also stated in his first Council of Ministers press briefing Wednesday that incentives for businesses are needed to help boost the economy, as is the updating of the country’s tax system. Those business incentives will be put together in consultation with the Ministry of Tourism and Economic Affairs.

Geerlings said many businesses do not apply good governance by not paying taxes. Business owners are urged “to comply with laws.”

He acknowledged that there is a chronic need for a well-established Tax Department with the required human resources and an optimal system that makes tax filing easier.
The government’s tasks are to get Princess Juliana International Airport and hotels “up and running as soon as possible.” It is essential for these two areas to get moving within a year to curb any further economic downturn, according to the International Monetary Fund (IMF).

Geerlings plans to continue the work of his predecessor Mike Ferrier in cutting government cost, but will add his own push for better administrative efficiency. He wants “to enhance performance” by seeking to “achieve more with less.”
One example of this efficiency venture is tackling “people who don’t show up for work” or civil servants who receive salaries, but are not placed in the government apparatus due to various reasons.

An “across-the-board financial recovery plan” is to be drafted by the Finance Ministry within the next three to six weeks.

In the interim, secretaries-general will be instructed to look at where more cost can be cut, not only money-wise but via the use of the right tools and people to aid in government efficiency.

“We want our country to be properly managed,” he said as a change to the constant echo, from in particular the Netherlands, about lack of management of local financial affairs.
The drive for more efficiency also extends to government-owned companies. Geerlings said past governments “could have acted in a better way … act as real shareholders” with government-owned companies. Supervisory boards must be more effective in their role and companies “have to pay their dues” to government’s pot.