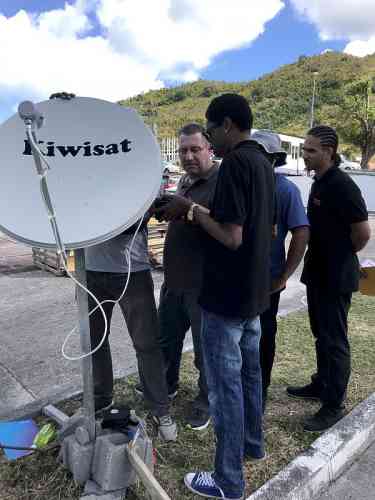 Some 20 technicians from both sides of the island took part in the free two-day installation seminar conducted by SES trainer Neil Bellingham from the United Kingdom (UK).
Kiwisat acquired the satellite space from SES to provide channels for their customers via Direct to Home (DTH). The SES-10 satellite makes it possible for Dutch St. Maarten and the entire Caribbean to receive Kiwisat programming.
“We have some 65 satellites orbiting around the world with different applications such as KU Band, C Band and KA Band, depending on the application. In this case for Kiwisat, we are using KU Band for Mexico and the Caribbean to provide this service,” explained Latin and North America Sales Director,” Ricardo Flores.
“We are trying to help our client Kiwisat to bring more value to their customers by offering a training for installation of antennas. Correct Installation is very important as that is what gives you the reception and programming. The antenna has to be pointed in the right direction and it has to be done right.”
Added Head of Marketing in the Americas Miriam Benedicto: “Like SES, Kiwisat wants to excel in execution, and the customer is the most important part of the whole scenario. The training seminar is to support Kiwisat reach its objectives, primarily to give very good service to its customers. We believe Kiwisat in this environment is the best company to do it.”
Kiwisat was installed in St. Martin as a company in 2014.
“We took almost three years to get set up because we had to start from zero as not many people here know about satellites, the services and installation. It wasn’t easy,” states Kiwisat President Andrew Wang.
“Our focus is on the English-speaking Caribbean countries which is different to Direct TV Latin America and even Dutch-side Cable TV for example. They use Latin American content, not American content. “We are bringing American content to the Caribbean. It took us three years because we care about getting our service quality right before launching.
“We can offer 130 channels and 90 of those are High Definition (HD),” he discloses. “That means we are better than Direct TV. From the start we set our standards very high, the highest we can achieve to satisfy our customers. Customers who paid so much money in the past should have received the best service, but they didn’t. We are changing that. That’s why we are focusing on this market to serve this area and give our subscribers the best service and quality. They will be first-class subscribers.
“We reduced our prices because I want everyone to have access to entertainment,” Wang continued. “TV is the cheapest form of entertainment in Caribbean countries. But even a lot of families don’t have TV service because they are being charged too much…$50, $60, $70 per month or more. Our most expensive package is $29 per month, and for that you get almost 100 channels of the best quality.”
Wang noted packages would include about three French-speaking channels for French subscribers.
Commented Sidney de Weever, Head of the Technical Department from regulator Bureau of Telecommunications and Posts (BTP) who observed the training sessions:
“Having a satellite service that has American, English-speaking content, provided at a low cost and in stable manner is a plus for St. Maarten and the Caribbean, especially after Irma when entertainment is hard to get right now. So, this is very timely.”
Kiwisat offices are situated in Bellevue, Marigot, (above Habitat). Tel. 0590) 87.53.93.