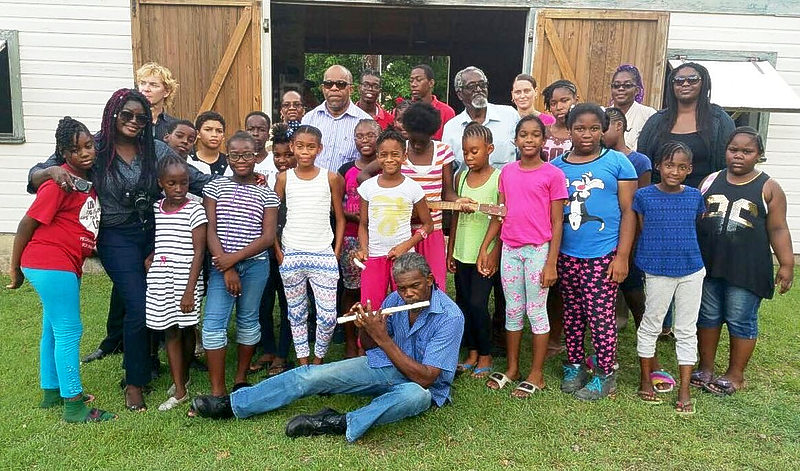 STATIA–The blacksmith shop on the grounds of Statia´s Historical Museum filled up with youngsters last week, all ready to learn more about the island´s rich musical culture.

Walton Schmidt and Clifford Gibbs were invited by Statia´s Intangible Cultural Heritage (ICH) Committee to demonstrate how not only music making but also making the musical instruments themselves are part of the island’s traditions.

ICH is about cultural expressions that are not material, such as music, dance, song, cooking, skills, crafts and traditions.The Netherlands has signed the UNESCO Convention to safeguard the elements of ICH and the event was part of the funded efforts to try to ensure that valuable ICH traditions are passed on to new generations.

Clifford Gibbs accompanies Walton Schmidt on his self-made fife with youngsters singing along.

Island Council member Clyde van Putten made an appearance to commend the efforts of the ICH Committee and encourage the youth to pick up these skills that make up Statia’s culture. He recalled that in his own youth, many of the instruments used to play music were made on the island with the material and tools available locally.

He reminded the youngsters that in addition to being fun and being part of culture, these skills can also be a means to make money: “Increasingly, people are appreciating authenticity, and things that have a local connection instead of being the same as everywhere else. And they are prepared to pay for these things. Tourism is on the rise in Statia, so there are opportunities there.”

Misha Spanner, leader of the Simon Doncker Club (the youth group of the St. Eustatius Historical Foundation) and member of the ICH Committee, gave a short explanation of the workshop. She introduced Walton Schmidt, also known as Lord Gene, the founder of the Killy Killy Band that plays Statia’s traditional string band music.

He explained how this music was able to survive all those years because the players made their own instruments: the fife, the baho, but even ukuleles and guitars. Mr. Clifford Gibbs then demonstrated how to make a fife.

Back in the days bamboo or wood was used, but nowadays PVC pipe does the job just as well. The youngsters were keenly interested to see how he turned a piece of pipe into a fife and wrote down the information in their notebooks.

They joined in with Mr. Schmidt and Mr. Gibbs and sang to the tunes that they played together. Some of the children were so keen to practice the skills themselves that they stayed on after the workshop was over. However, during the next session, all participants get the opportunity to make their own fife – and other instruments too.

Those who are interested in joining this workshop, can get more information at the Historical Museum.