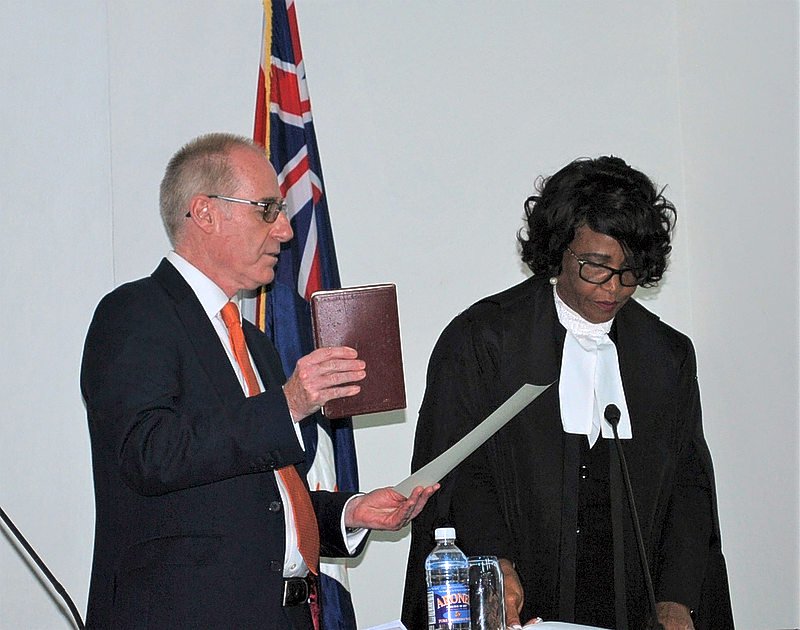 ANGUILLA–Governor Tim Foy, OBE took the oath of office in Atlin N. Harrigan Parliament Building on Monday, August 21.  Deputy Speaker Terry Harrigan welcomed the Governor and his family to the beautiful shores of Anguilla, and stated that the principles of democracy must continue to be safeguarded to ensure continued national advancement of Anguilla. He was sworn in by Justice Pearletta Lanns.

Opposition leader Palmavon Webster and Chief Minister Victor Banks offered welcoming remarks after the oath was taken.  Palmavon Webster noted that Anguilla values the British government’s commitment to oversight, and had every confidence that his wise counsel would greatly benefit both the government and its people.

Governor Foy inspecting the Guard of Honour along with the Chief Minister and Commissioner of Police.

Victor Banks then welcomed the Governor, saying all 35 square miles of Anguilla would be his home for years to come, and that the authentic Anguilla experience would result in his best posting ever. He stressed that the common purpose of all branches of government is achieving what is best for the people of Anguilla, and he expected all deliberations and discussions to be conducted with decency, civility and respect. He extended a warm welcome to the Governor and his entire family.

The Governor then thanked all in attendance for their words of welcome, and expressed his pleasure on taking the office and his commitment to Anguilla. He briefly listed some of his priorities while serving as Governor, stressing that he would pay close attention to what Anguilla needed and wanted from him. He said he aims to listen and understand, create genuine partnerships with the Chief Minister and Government officials, and his priorities will include the continued effort to reduce crime, while strengthening safety and security, the protection of the most vulnerable citizens to include stressing crime protection legislation, and continuing to build a strong economy for the future. He ended his talk by saying he will be driven by facts and his determination to do the right thing. “Let’s get to work,”he said.

Prior to his assignment in Anguilla, Foy worked in the United Kingdom’s Home office on counter-terrorism issues, and for two years as the lead official in the private office of Theresa May, the current British Prime Minister. He served more than 20 years with the UK Department of International Development, working in numerous countries around the world, including Afghanistan and Sudan.

After the swearing-in ceremony, Governor Foy inspected the guard of honour outside the Parliamentary Building, along with the Chief Minister and Commissioner of Police Paul Morrison.