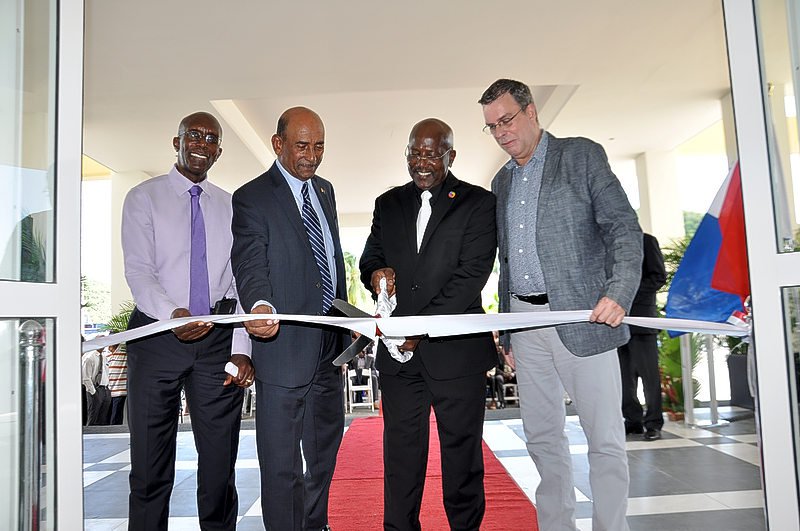 POND ISLAND–After sitting unoccupied for eight years, the new Government Administration Building on Pond Island was opened during a ceremony held in front of the entrance on Friday.

Prime Minister William Marlin, Justice Minister Richard Gibson and representatives of Social and Health Insurances SZV and General Pension Fund Administrator APS cut the ribbon to declare the new government administration building open. Marlin said the opening represented another promise made that was kept during the nine months the current administration has been in office.

Before the event began, a group of lawyers showed up at the event and stood at the entrance of the building for about 30 minutes demanding to see the Justice Minister. They eventually left the entrance after Marlin arrived, spoke to them and agreed to meet with them after the ceremony (see related story).

A “glorious day” was the way Finance Minister Richard Gibson described the opening of the building. He said the new building will result in tremendous savings for government, whom he said will save approximately NAf. 350,000 to NAf. 400,000 per month in rental payments. “Government will no longer spend 17 million guilders in rent in eight years with nothing to show for it.” Government will also be able to repurchase the building after several years. Gibson said the sitting government met NAf. 180 million in debts “that we had to deal with” when it took office several months ago and if everyone had taken liens to force government to pay, then the opening of the building would not have been realized.

Government’s Project Coordinator Erno Labega, who oversaw the works to the building, said the various arms of government will occupy the building in phases. The first phase is the relocation of the Council of Ministers, which has already occurred. The second part of the first phase will be the relocation of Ministry of General Affairs, who will move into the fourth floor, opposite where the Council of Ministers is located by the end of this month to mid-October. The ground floor will then be occupied, followed by the second and third phases. The Public Service Center (PSC) will occupy the ground floor. Labega said the intention is to offer quick service to members of the public, similar to what PSC offers at its Simpson Bay location. Customers should be in and out of the PSC within a few minutes.

There will also be a “culture change” at the new building, as members of the public will be met on the ground floor and will not be allowed to go to various offices in the building as is the case at the old Government Administration Building. The main lobby of the building will have an LED display background, which can be changed based on major happenings on the island. Labega said work is still being done to finalize the entire building. He said everyone will be proud of the final product.

SZV Director Glen Carty went down memory lane and explained how SZV got involved in the project. He said in 2013, it was determined that government owed SZV NAf. 113 million. In 2014, a meeting was held with government, and parties established an amount of NAf. 75 million as the amount owed, however government did not have the finances to cover this debt. Carty said under such circumstances SZV would place liens on buildings and government’s accounts, but he noted that this would disrupt the functioning of government. In 2016, Carty met with Gibson and a “creative solution” was found.

“So instead of placing liens, we reached an agreement that SZV would purchase the building,” Carty said, noting that since the building had been sitting empty for eight years, a lot of work had to be done to make it habitable. SZV decided to “take the lead” to complete the building, as the insurance service provider wanted to ensure that the building was in a habitable position so that rent can be collected. The solution reached with government, he noted, enabled government to lower the amount owed to SZV. He urged government to continue with its plan to “empty” the various buildings where government departments are located, so that these departments can move into the new government administration building and to also get Block D ready.

Marlin, who in the past had alluded to the building as the world’s largest and most expensive pigeon coop and as a white elephant, said he was happy to celebrate the opening of the building. He called the opening a “soft” one, noting that more work is still to be done. He said, to rounds of applause, that the decision to open the building was a political one as a promise had been made to the people that the building would be delivered during the current governing period and this was done. “This was one of several promises that were made to the people of St. Maarten, and in particular to the civil servants and the governments in the years to come.”

Marlin said the ministers decided to move with their existing furniture and not order anything new. Marlin, as well as, Carty, Gibson and Labega thanked all those who had been involved in this initiative.

At the end of the ceremony, the media was given a tour of the new office of the Prime Minister and a brief insight into the work still to be done to the building.
Source: Daily Herald
New govt. administration building opens, ministers have relocated