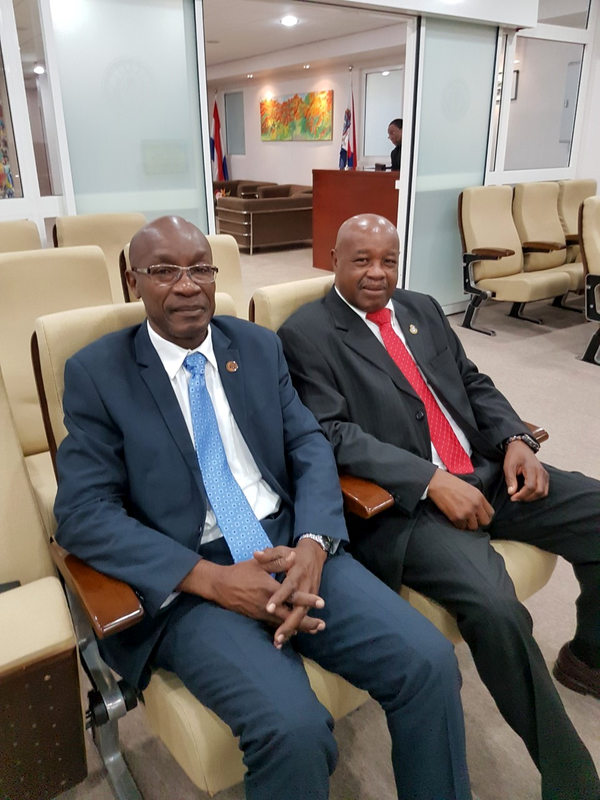 PHILIPSBURG–The credentials of the four incoming parliamentarians were accepted by Parliament with the support of opposition United People’s (UP) party to form the quorum for Friday’s urgent plenary session. The red, white and blue coalition only had five Members of Parliament (MPs) present for the session.

Chairwoman Sarah Wescot-Williams said at the start of the meeting that with only 11 sitting MPs following the resignation of four to become ministers, Parliament’s majority stood at six MPs and not the customary eight. The coalition does have a majority in such a case, she noted.

However, there was no majority of six representing the National Alliance/United St. Maarten Party/Democratic Party coalition for Friday’s session. MP Silvio Matser (US Party) was absent with notice from the session, leaving the coalition with only five members: MPs Wescot-Williams, Rodolphe Samuel and Ardwell Irion (NA), Frans Richardson and Chanel Brownbill (US Party).

Without at least one UP parliamentarian signing in to vet the credentials of incoming MPs Hyacinth Richardson, George Pantophlet and Romeo Pantophlet of NA and Perry Geerlings (DP) the meeting would not have gone ahead.

Unlike the debacle on the sister Dutch Caribbean island of Curacao, which recently faced a similar coalition majority issue, Friday’s session did not dissolve into chaos. Instead, four UP parliamentarians – Theo Heyliger, Franklin Meyers, Claret Conner and Sidharth “Cookie” Bijlani – signed in for the session.

UP leader Heyliger said after the credentials were accepted by Parliament that his party “does not play politics” and wanted to ensure the way was paved for the incoming MPs. But, he as well as Conner were keen to point out UP was needed for the quorum.

Conner said Government had a job to do that includes executing its budget and UP “was in into petty politics.”

In response, Wescot-Williams said it was “commendable” that UP had “allowed the meeting to continue.”

The four incoming MPs still have to be sworn-in by Governor Eugene Holiday before they can formally take or retake their seats, as is the case of George Pantophlet and Hyacinth Richardson, both of whom served in the previous Parliament.

This Third Parliament has been sitting since October 31 and started out with the full 15 members. That number reduced to 11 on December 20, 2016, after now former MPs William Marlin, Silveria Jacobs, Emil Lee and Christophe Emmanuel resigned to serve in the Council of Ministers.