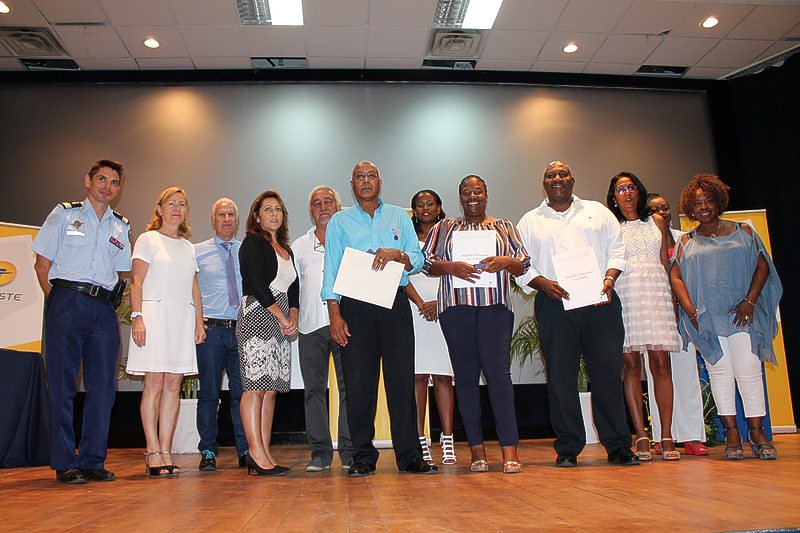 MARIGOT–French-side post office La Poste held a swearing-in ceremony for new postal workers as well as a medal ceremony for long-serving employees on Wednesday at the Sandy Ground Cultural Center.

The ceremonies were attended by Regional Director of La Poste Michèle Paolini, Executive Director in charge of La Poste overseas, Pascale Scoarnec who was on a visit to St. Martin and Commandant of the Gendarmerie, Sébastien Manzoni.

Also present was Director of La Poste in St. Martin, Katy Roesch and Jean-Michel Vonfeld who is responsible for parcel post in St. Martin.

The swearing-in of new postmen is a tradition dating back to 1790 where every employee is committed to being integrated in the daily work to accomplish the missions of La Poste.

The commitment aims to maintain the trust of employees and customers and contributes to improve the economic, financial and social performance of the La Poste group.

Reciting of the oath formalises the six values of La Poste; openness, proximity, fairness, consideration, sense of service and accessibility.

In addition to the Medal of Honour, La Poste created the Company Medal that rewards salaried postal workers under the same conditions, thus establishing fairness of treatment between all postal workers.

On this occasion the Honneur Entreprise was awarded to Manuel Guy and Bryan Marcia. The Bronze Medal was presented to Lake, Elias Reno.

The medals are in recognition of more than 20 years exemplary service during which the recipient has to have three consecutive years of excellent reports.